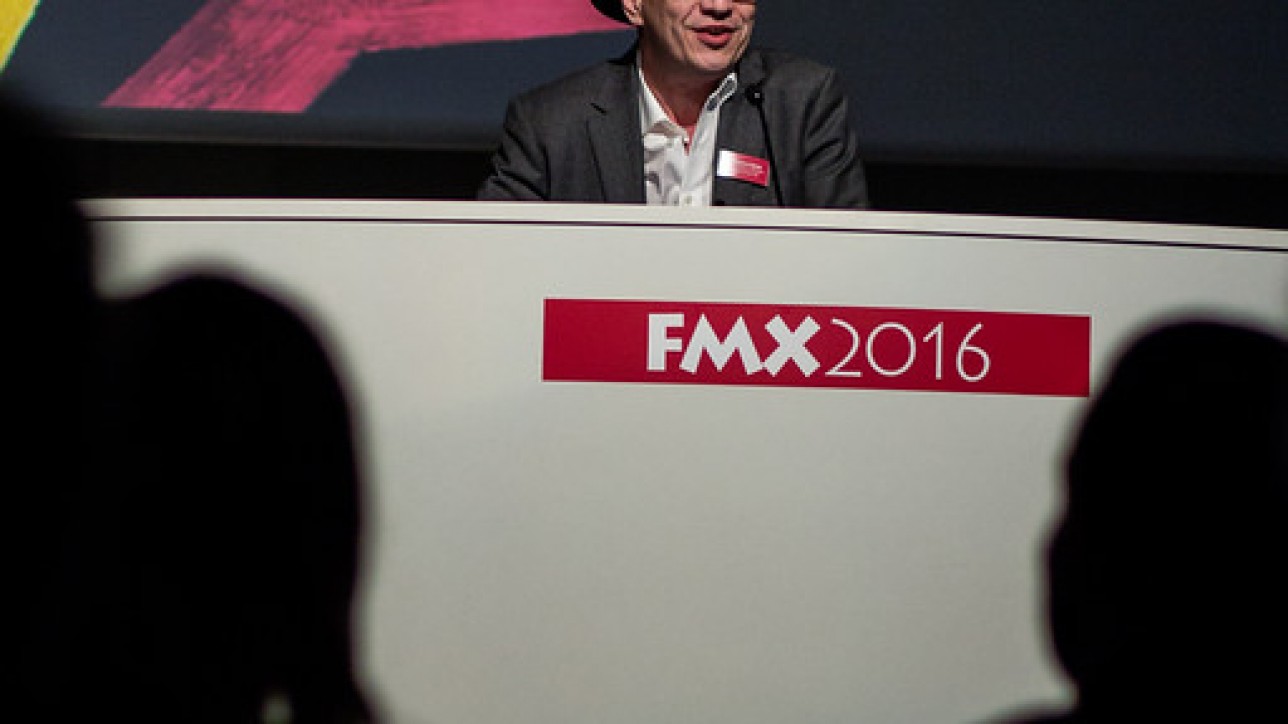 The Filmakademie Baden-Württemberg is turning 25! Wohooo! And what a place it has become over the years. So, in a keynote at this year´s edition of FMX, the managing director of the Animationinstitut at the Filmacademy, Prof. Andreas Hykade presented a look back into the past and a look into the future.

Here is his keynote, with kind permission by Prof. Hykade and the great team at FMX and the Animationsinstitut:

Welcome to 25 YEARS OF FILMAKADEMIE BADEN-WÜRTTEMBERG at FMX 2016. To celebrate this birthday I want to take you on a quick ride through the vital history of Animation at Filmakademie.

We start with the roots: In 1980, a man called Albrecht Ade did not only bring the creative spirit of Eastern European animation to Stuttgart, he also established a space at the Kunstakademie, the Trickfilmklasse Ade, where young designers started to realize raw and wild and political animated films with one lonely 16 mm camera.

But Ade knew, that it´s not enough simply to just create art for art´s sake alone – art also needs a place where it can be presented. So he came up with the idea for the International Trickfilmfestival Stuttgart, the ITFS, and people from all over the world came and shared the best of their art with a growing, enthusiastic audience. A solid community came into being where locals mixed with international guests and the audience recognized the raw and wild energy of these films as a vital alternative to the mainstream.

By the beginning of the 90s the Kunstakademie had gotten too small for Ade, so he persuaded some good-hearted politicians to establish a Filmakademie in Ludwigsburg and he somehow arranged to become the head of this new institution and took his whole class from Stuttgart with him. They were a diverse crowd with different approaches, most of them remain very successful in the field of animation and VFX to this very day. So, let me show you an example from these early days:

Volker Engel was part of the very first student generation at the Filmakademie. After completing his studies he and his fellow student Marc Weigert followed the filmmaker Roland Emmerich to Hollywood, received an Oscar for Best Visual Effects on „Independence Day“, founded the company „Uncharted Territory“, almost lost their minds over the spectacular VFX for the movie „2012“, but are still alive and kicking and very busy at this moment finishing the movie „Independence Day 2“.

In 1993 the young English filmmaker Philp Hunt won the „Mercedes-Benz scholarship prize“ at the ITFS. This did not only mean 40.000 Deutschmark in cash – it also meant he could realize an animated film at the Filmakademie. „Ah Pook is here“ became a cornerstone of independent animation, influencing generations of animation filmmakers around the world, and Hunt did not only became part of Studio A.K.A., but still found the time to direct the timeless childrens classic „Lost and Found“. Here is „Ah Pook is here“, directed by Philip Hunt, produced by Eddel Beck, 1994, 35 mm with digital postproduction.

In 2002, Thomas Haegele founded the Institute of Animation, Visual Effects and Digital Postproduction at the Filmakademie. He established the „Research & Development“ department, which is run by Prof. Volker Helzle to provide the groundwork for a marriage of the arts with technology. In 2008, he included the Interactive Media course run by Prof. Inga von Staden into the curriculum of the Institute of Animation to set the path for a future Transmedia mindset.

Thomas Haegele also took over an event, which was originally founded in 1994, called „Film- & Medienbörse“ from Albrecht Ade. He renamed this event „FMX“, took the event to an international level and transformed it into Europes most vitalizing Conference on Animation, Visual Effects, Games and Transmedia.

Most importantly, Thomas Haegele built a highly qualified team to run these complex operations. With specialists in all fields and departments and projects, the Institute of Animation became an internationally renowned institution and its name stands for the highest quality. 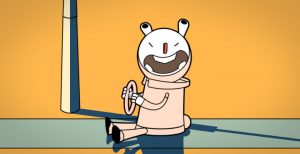 Bunnies! This 30 second ITFS-trailer is a very special production for the Filmakademie. Teamwork became more and more important, and the team of „Bunnies“ reads like a dream team of Animation: Jakob Schuh, Oscar Nominnee and director of „The Gruffallo“, Johannes Weiland, director of „Gruffallo´s Child“ and the beautiful German animation classic „The Boy and the Beast“, Saschka Unseld, director of Pixars „The Blue Umbrella“, now working at Oculus Story Studio, Chris Stenner, Oscar Nominnee for „Rocks“ and so on and so on. After studying, most of the team members of „Bunnies“ founded Studio Soi, one of the studios the region of Baden-Württemberg is most proud of.

And let me show you one further film of the early days of the Institute. „458 NM“ is a sensitive portrayal of a sexual act between two snails. Created by Ilija Brunck, Thomas Weber and Jan Bitzer, who later founded the collective Polynoid and the company Woodblock, „458 NM“ set the standard for a whole generation of VFX-Artists that used the medium for individual expression.

There was always space for every different kind of artistic expression at the Institute of Animation. This is an example for classic craftmanship called „Lebensader“ by Angela Steffen. „Lebensader“ is not only one of the most successful animated films of the Filmakademie, winning countless awards including prizes in Annecy and Ottawa, it also shows the empathetic and unique style of a promising young filmmaker. At the moment Angela is working on her own animated preschool series called „The Patchwork Pals“ with Studio Filmbilder. This is an excerpt of „Lebensader“, 2009, hand-drawn with computer coloring.

I´ve known Filmakademie for 25 years now, because I studied there in the early days. The Filmakademie gave me the space and the freedom to realize my 17 minute coming-of-age film „We lived in Grass“. By the end of my studies, I had a point of view from where to operate, so I could explore into different territories, but still retain my own style of expression.

I returned to Filmakademie as a teacher in 2001 and since 2015 I´m the Head of the Institute of Animation there, and so I ask myself: Where do we stand now? And because this question leads to even more complex questions, I´m very happy to have a great team that I can discuss these questions with.

If we believe our own pitch line, we are one of the worlds most exciting places to study the whole range of Animation, VFX, Games and Transmedia.

We form an international community, where different cultures can encounter and learn from one other. And the credo „Learning by doing“ drives and inspires the Designers, Writers, Directors, Animators, GameDesigners, Producers and Technical Directors to become leading forces of the industry.

You can see the brand-new works of our students here, at the School Campus of FMX or immerse yourself in our VR-experience „Longing for Wilderness“. You can experience the Interactive works at the Game Zone at the ITFS. And you can listen to new musical live interpretations of our animated student classics sung by Cornelia Ragg at the Animators Arena at the Schlossplatz.

So, you see, the Institute of Animation is vibrant and alive. We will try to continue to be a vital inspiration and an engine for the Animation, VFX and Games scene. And, of course, we will continue to organize and advance FMX, Europes most important Conference on Digital Entertainment for the sake of the international, the national and the regional community.

And so I´d like to end this presentation of 25 years of Animation at the Filmakademie with some Trailers for FMX, that shaped the looks of so many of these grand events, won countless awards, kick started the careers of many young talents, and opened the heart of a whole community. We start with „Rollin´ Safari“, followed by „Wrapped“ and finish, one more time, with the FMX-trailer 2016 „Jazz Orgie“ by Irina Rubina and Christiane Goppert who are with us this afternoon. So, enjoy the trailers!

Ladies and Gentlemen, thank you for your attention.