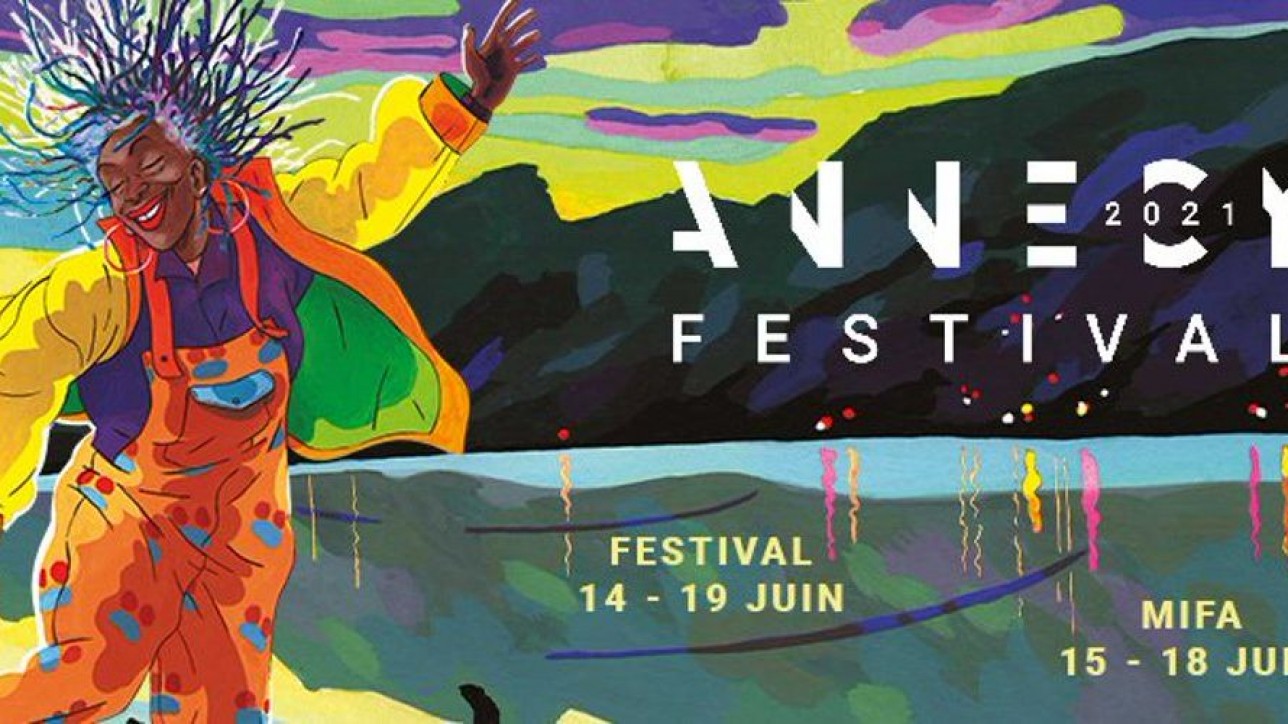 For the Festival and the International Animation Film Market, it’s “raise the curtains” on their first hybrid edition!

After over a year with no „physical“ events, the Annecy Festival appears to be the very first international film festival to be held live and on-site!

And the program, in line with Annecy’s DNA, is packed, jam-packed!

„To meet again. With this single goal in mind, for nearly a year the CITIA team has been rallying to welcome the animation film community, betwixt lake and mountains. If Annecy 2020 was the epitome of resilience, Annecy 2021 will be that of combat. The combat aimed to reposition Culture at the core of our existences and extol, yet again, works and their creators under the best possible conditions. We applaud those pioneers who, in 1960, cradled the destiny of this infant Festival in the „Venice of the Alps“. We also applaud those men and women who strove one after another to turn this event into an unmissable annual highpoint. In one way or another, Annecy is determined to stand its ground as animated cinema’s radiating center.“
Dominique Puthod, Chairman and Mickaël Marin, CEO

In spite of an unusual context, at long last this year will finally be the time for celebrating the 60th anniversary of the Annecy Festival. A trip back through these six decades of animated history will be on offer all week long.
„Annecy is the first-ever movie festival fully dedicated to animation and it has become the major event of this sector, worldwide. We will continue to claim this special place in History as ours. Our aim is to always stay the foremost meeting place for our entire community and industry. Over the course of the years, this event has grown impressively, becoming more and more inclusive. Today we are proud to have remained relevant throughout our numerous transformations, without ever neglecting this priceless legacy handed down by the pioneers who were there at its genesis.“
Marcel Jean, artistic director

On the program: The 60th – the screening  – A special screening, full of first-times and surprises!

• First time on a big screen: Mémoire d’une minute, a program of one-minute short films on the topic of memory, by 11 Annecy-prizewinning directors. Interwoven on an initiative by Joan C. Gratz, they offer us art ranging from the sentimental to the absurd.
• First screening in 1960: An Award for Mr. Rossi, a short by Bruno Bozzetto in competition at the time! See it again in 2021, still in Annecy!
• World premiere of the Walt Disney Animation Studios short film Far From the Tree, with a pre-recorded intro by director Natalie Nourigat.
Tuesday June 15, 8:30 p.m., Bonlieu Grande Salle
• Plus, make sure you catch the urban exploration „Annecy Festival, 60 Years and Still Animated„, the CNC show at the Musée-Château, the Village du Festival, and so much more.

From jury members on to programming and other Mifa events, get more details about this special year dedicated to African animation!

On the slate: four VIP-guided tours by directors and art teams through the inner workings of their movies.
DreamWorks Animation will take us behind the scenes of its two new features The Boss Baby 2: Family Business and Spirit Untamed, also included in Screening Events.
As for Netflix, it will revisit the two seasons of Love, Death + Robots, already a cult-status adult animation series.
Last of all, Baobab Studios will lead us along the artistic and technological path of Erick Oh’s most personal project to date: Namoo.

The Ape Star by Linda HAMBÄCK – Denmark, Norway, Sweden
„A film that follows the grand tradition of cinema for young audiences, from the north of Europe.“

The Ape Star – trailer Eng from Attraction Distribution on Vimeo.

Snotty Boy/Rotzbub by Marcus ROSENMÜLLER, Santiago LOPEZ JOVER – Germany, Austria
„A pleasant surprise for this first animation feature produced in the Austrian vernacular; a funny movie that takes a biting look at reality.“
You Animal! The Nimfa Dimaano Story by Avid LIONGOREN – Philippines
„One of the selection’s special surprises. A fun and funny film tackling adult topics, with complex characters and a scathing depiction of social differences.“

Jiang Ziya: The Legend of Deification by LI Wei, CHENG Teng – China
„A spectacular action and adventure work, another lush example of the artistic ambitions and high technical feats of Chinese animation.”

The Deer King by ANDO Masashi, MIYAJI Masayuki – Japan
„Production IG studio’s most recent production, a film impatiently awaited by animation fans. This is a complex, expansive and ambitious work. Among others, Masachi Ando is known for having worked alongside Hayao Miyazaki and Satoshi Kon.“

Flee by Jonas POHER RASMUSSEN – Denmark, France, Norway, Sweden
„A highly anticipated feature film coming to us after its incredible success early this year at Sundance.”

Lamya’s Poem by Alex KRONEMER – Canada, USA
„Amovie which belongs to the introductory geopolitical sphere, quite present in animation cinema the recent years with such films as The Breadwin ner Lamya’s Poem is the first animation feature directed by Alex Kronemer, already the scriptwriter of Bilal: A New Breed of Heroes selected out of competition at Annecy 2015.“
Josée, The Tiger and the Fish by TAMURA Kotaro – Japan
„A juicy rom com produced by Bones that holds pride of place at the Festival’s opening session.”

« My Sunny Maad from Michaela Pavlatova is the first feature film from a director who won the Cristal for short film in 2012. It is a touching story, full of nuance and subtlety about the experience of a Western woman living in Afghanistan. Definitely one of the most anticipated films of the year! » Marcel Jean, artistic director

The Fondation Gan pour le Cinéma has been backing the Annecy International Animation Film Festival for 15 years. In 2021 this partnership will grow even stronger: the Gan Foundation Award for Distribution will now reward a feature film from the official competition. The 20,000 € endowed prize will be awarded to the French distributor of the film chosen by the Fondation and will enable the winner to conduct one or more specific promotional operations for the film’s theatrical release.
This prize should help audiences and films find one another, above and beyond the Festival. For over 30 years the Fondation Gan has been rewarding ambitious and unique feature films, both live shoot and animation, so far honoring over 200 eminent

Archipelago by Félix DUFOUR-LAPERRIÈRE – Canada
„This film signals the return of a filmmaker with a strong artistic touch, just two years after treating us to Ville Neuve, also competing in the Contrechamp section. What we have here is
a visually sumptuous essay, reminiscent of the spirit of Chris Marker“

Cryptozoo by Dash SHAW – USA
„Cryptozoo comes to us following rave reviews at Berlin and Sundance. This feature film spins its magic between poetry, science fiction and political philosophy. With it, Dash Shaw has shown himself to be a rightful heir to René Laloux“

Chicken of the Mound by CHEN Xi Germany, China
„This movie will astound many! The director entices us into a world thronging with robots, a mix between David O’Reilly and Matrix

Chicken Of The Mound | Official Trailer | Xi Chen from Xi Chen on Vimeo.

Climbing by KIM Hye-mi – South Korea
„Climbing follows a female character obsessed with mountain climbing and performance, forced to face her own personal demons. Here is a film that flickers between intrigue, mystery and nightmare.”
Absolute Denial by Ryan BRAUND – United Kingdom
„A one man work that once again again describes how an artificial intelligence can overtake its creator.”

Bob Spit – We Do Not Like People by Cesar CABRAL – Brazil
„This film was to have been part of the Annecy 2020 selection. Unfortunately, this stop motion documentary dedicated to the famous artist Angeli could not be completed on time due to the pandemic. We are so very happy to be able to present it to you this year.”
My Uncle José by Ducca RIOS – Brazil
„A political and historical work made for young viewers. A beautiful example of the creativity that has courageously survived in Brazilian animation through these very tough times.”
City of Lost Thing by YEE Chih-Yen – Taiwan
„This work entices us into a city awash with plastic bags and other discarded items. What we have here is an original piece, with a strong musical underpinning.”
Marcel Jean, artistic director

And in the Screening Events, many sneak previews:
On Monday, June 14 at 8 :30 p.m., an in-competition Japanese film will open the celebrations: Josée, The Tiger and the Fish by TAMURA Kotaro – Japan (distributed by Eurozoom).
As a prelude, we will also be fortunate to discover the world premiere of Tomorrow’s Leaves, an animated short by Studio Ponoc, hand-drawn and hand-painted.

Annecy and the women of animation

Annecy was among the first festivals to sign the Charte 50/50 in 2018, and it is continuing to march toward gender equality. On the programming front, in 60 years the Festival has gone from 9% to nearly 45% of movies directed by women as part of the 2021 Official Selection.
Women will represent over 40% of the speakers at the different meetings organized this year. This percentage hits 42% for the Works in Progress participants and 50% for the Masterclasses.
Historical levels for these categories. And on the juries, gender parity is also applied.

Even if some people will not yet be able to travel, a return to the lakeshore is great news for the entire profession and a sign of brighter days on the horizon. Mifa 2021 is adapting and revisiting its formula, setting an historical milestone and prefiguring new market models for the years to come:
– On site: priority to presence-based encounters in the Impérial Palace, with mini-stands for French and European delegations, and privatized tables for companies.
– On-line: content which has rarely been so bountiful, to provide visibility to the many international companies and delegations at their virtual stands and pavilions, to the countries and professional organizations, to the artists and producers, to content-hunting buyers from around the world, to the writers, festival programmers, publishers, producers, animation studios, and to the students and young artists at the Mifa Campus on Friday June 18.
Mifa Campus: as every year, an emblematic figure of the animation world will be on hand for the Mifa Campus, coming to inspire and encourage the students and young talents of tomorrow’s animation.
This year, and more specifically to celebrate African animation in Annecy as well as Africa2020 Season, we are proud and pleased to welcome as our 2021 Mifa Campus sponsor: Marguerite Abouet. It will be a joy to meet her again for a discussion with young talents from the African continent, and we thank her heartily for her dedication.
It is also an immense honor for us to welcome special guest Mr. William Kentridge, a multi-disciplinary artist whose work in animation will be showcased in a retrospective at the Annecy Festival. We will be meeting him again on the Mifa Campus for a conversation with Ms. N’Goné Fall, general curator for Africa2020 Season. They will both inspire and encourage numerous artists from Africa and around the world. We are profoundly grateful to them for their time and for these precious moments we will share with them on line.

In this year of celebrating African animation, we wanted to extol the work of an African studio, a genuine trail-blazer of animation in its home country. Its journey in just a few years resulted in the production and shooting of series and feature films which have already earned a constellation of prizes. The studio has helped train talents in South Africa and throughout the African continent, structuring an industry to give all its professionals support. We are overjoyed to bestow this prize on Triggerfish Animation Studios. Congratulations to Stuart Forrest and his entire team!
Véronique Encrenaz, Head of Mifa