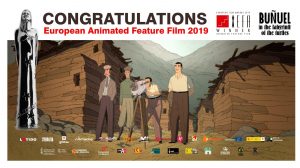 When the producer Manuel Cristóbal proposed to me to direct a film based on the graphic novel „Buñuel in the Labyrinth of the Turtles“, it brought back memories about my father. I recall from my childhood years that he was a great admirer of Luis Buñuel. I remember when he’d tell me the story about some people who couldn’t get out of a room because it had no doors. I couldn’t understand but I found it fascinating! The possibility of telling a story about Luís Buñuel was definitely fascinating for me though also terrifying. When I started writing the script with Eligio Montero we focused on Luis, who in 1932, when he shot the documentary in Las Hurdes, was a young director seeking his own filming style and language. That shoot represented a turning point in his career, changing the way in which he gave shape and form to Surrealism and his films, and to a certain extent it brings back to mind LOS OLVIDADOS, that movie he shot years later. Throughout the months I spent doing research work and writing, my efforts were mainly focused on the life of the character himself, interviews, remarks and more interviews. On my bedside table I had a book from the Academy of Cinema with interviews of people who had worked with him, my favourite book for my research. I was so engrossed in the story that one night I even dreamt that I was having a coffee at a terrace bar with none other than Buñuel himself and spoke to him about the film.In the movie BUÑUEL IN THE LABYRINTH OF THE TURTLES what I am trying to do is to portray that young artist, not like the famous director he is today, but as he was at the beginning of his career when hardly anyone knew him, just a guy called Luis. To that end, in order to get close to the character at the personal level, I was very fortunate in that I was able to count on his son, Juan Luis, with whom I held many conversations at his house in Paris, a series of encounters full of details, laughter and affection. This film also offers to us the opportunity of revealing to viewers another artist who was also a friend of Luis: Ramón Acín. A person with a really big heart, as big as his native land, Huesca. A producer by accident, as well as a painter, a sculptor, a poet and a man extremely devoted to others. I hope you enjoy this voyage to the world of Buñuel as much as us.
Bruno Felix, BUÑUEL EN EL LABERINTO DE LAS TORTUGAS, Eligio Montero, José Fernández de Vega, José Manuel Piñero, Manuel Cristóbal, Salvador Simó