Due to the still incoming emails we will change the timeline for all who wants to participate! If you want to attend, please send an email to us until Thursday, October 29th, 12.00 am MEZ/German Time)

You can only submit questions to Mr Keane until Wednesday, October 28th, 12.00 am (MEZ German Time).

I hope, this email find you all safe and sane! I know, the pandemic has changed so much over the last months.

Our initiative, the INDAC community for all animation and vfx people in and from Germany had to cancel all physical events and screenings but we looked around to find new ways to hosts events where we all can participate and celebrate the medium of animation.

It is with great joy that we can invite you all today to the first INDAC online event!

regarding his directorial feature film debuts „Over The Moon“

For us, for me especially, it is a step into new event-territory

and we want to prepare it the best possible way to make it a treat for Mr Keane and for you!

If you want to join the Q&A you have to send us just an email. Send it to indac@gmx.de – keyword for the subject line is : „Over the Moon“ 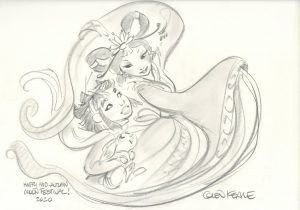 Of course the talk is going to happen in more or less english language. And we would expect from your side, that you have a look at the movie „Over the Moon“ before attending the Q&A on October 29th. Obviously we can´t do the usual cinema screening upfront this time, but at least we can this time invite everyone around the globe.

And because this will be all new and tricky for me, I would ask you all to send in your questions for Mr Keane upfront the event. We will try to get as many answers from our guest as possible this way. I hope you can agree to that.

Glen Keane is a 38-year veteran of Walt Disney Feature Animation, training under Walt Disney’s Nine Old Men. Glen created many beloved Disney characters such as The Little Mermaid, Aladdin, The Beast, Tarzan, and Rapunzel. In 2012, Glen departed Disney, founding Glen Keane Productions as a way to further his exploration of animation, design, and film. He has since collaborated with partners such as Google Spotlight Stories and the Paris Ballet. Glen’s most recent collaboration “Dear Basketball” with John Williams and the late Kobe Bryant received the 2018 Academy Award® for Best Animated Short Film. Glen is currently directing the animated feature film Over the Moon in partnership with Pearl Studio and Netflix, which is due to be released Fall 2020.

Fueled with determination and a passion for science, a bright young girl builds a rocket ship to the moon to prove the existence of the legendary Moon Goddess. There she ends up on an unexpected quest, and discovers a whimsical land of fantastical creatures. Directed by animation legend Glen Keane, co-directed by John Kahrs, and produced by Gennie Rim, and Peilin Chou, Over the Moon is an exhilarating musical adventure about moving forward, embracing the unexpected, and the power of imagination. The film stars Cathy Ang, Phillipa Soo, Ken Jeong, John Cho, Ruthie Ann Miles, Sandra Oh, Robert G. Chiu, Margaret Cho, and Kimiko Glenn.

The film offers a new and unique interpretation of the traditional folklore behind the Chinese Moon Goddess, Chang’e, and the significance her story holds during the Chinese Mid-Autumn Moon Festival.

Watch OVER THE MOON, on Netflix this fall: https://www.netflix.com/OvertheMoon