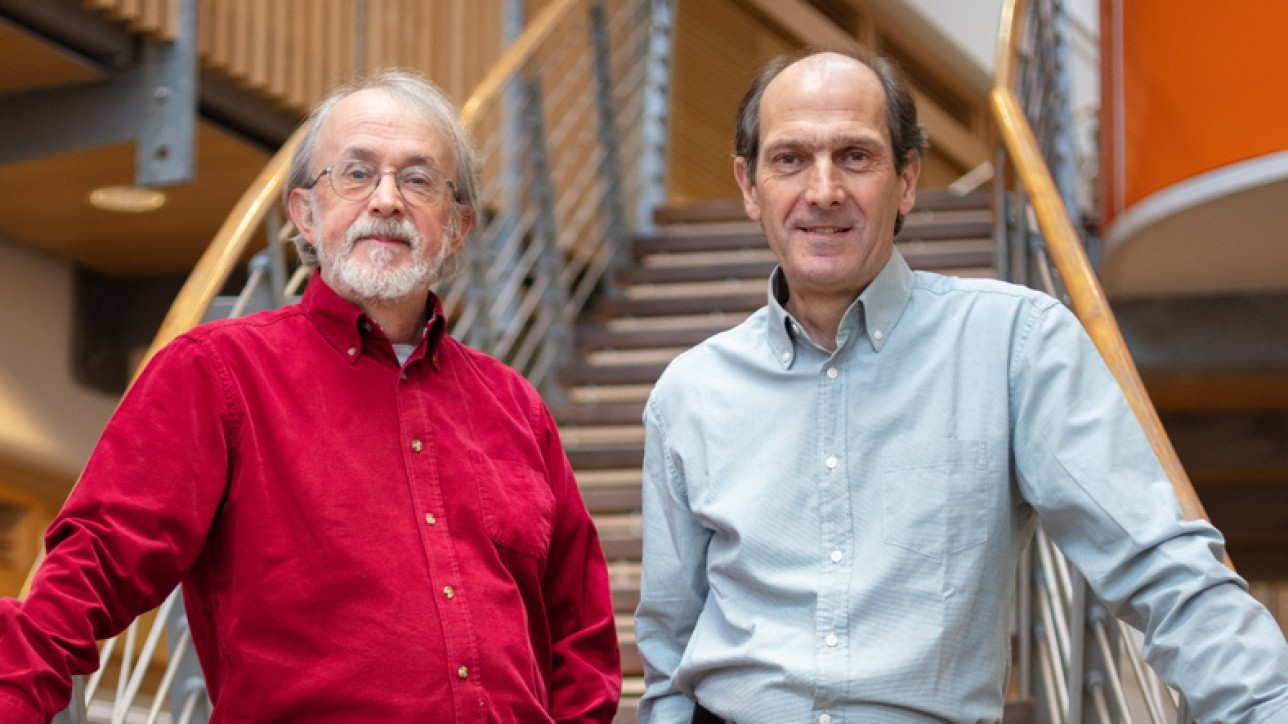 With over 40 years of producing award-winning content, Aardman co-founders Peter Lord and David Sproxton announced today that they are preparing the company for continued success over the next few decades by transferring the company into Employee Ownership, effectively selling the company to the workforce.

The sale is aimed at ensuring that Aardman remains independent, thus securing the creative legacy and culture of the company for many decades to come.

The majority of Aardman’s shares will be transferred into a trust, holding them on behalf of the company’s workforce. The senior management team will remain in their existing roles and will form the Executive Board, creating a seamless transition for the company and ensuring creative, cultural and business continuity.

David Sproxton will continue as Managing Director and will look to appoint a new MD within the next 12 months to replace him at which time he’ll segue into a consultancy role. The MD will remain accountable to the Trust.

Peter Lord will remain in his role as Creative Director at the company with a focus on the company’s feature film output. This includes the upcoming features Shaun the Sheep Movie: Farmageddon, co-directed by Richard Phelan and Will Becher due for release in autumn 2019 and Chicken Run 2, currently in development with Sam Fell set to direct.

“We’re not quitting yet”, said Lord & Sproxton, “but we are preparing for our future. This approach, the creation of an employee trust, is the best solution we have found for keeping Aardman doing what it does best, keeping the teams in place and providing continuity for our highly creative culture. And of course, those that create value in the company will continue to benefit directly from the value they create”.

“The statistics show that employee owned companies are significantly more successful than conventionally owned companies. So we are very excited by the prospect of seeing Aardman roll far into the future under this arrangement and can rest easy that those four decades which have slipped by have paved the way for many more years of great creativity”, they continued.

Four-time Oscar winning director Nick Park will continue to have an active role in the studio’s feature film and shorts productions. Park has been a fundamental creative voice at the studio since joining in 1985 and is known for his legendary Wallace & Gromit, winning three of his four Oscars for the characters in the shorts The Wrong Trousers, A Close Shave and Best Animated Feature Film for The Curse of The Were-Rabbit. He co-directed the global box office smash hit Chicken Run and made his sole director debut with Early Man, a prehistoric comedy adventure released earlier this year. He will form part of the new Executive Board of Directors, who will report to the Board of Trustees.

The role of the Board of Trustees is to ensure the Executive Board is staying true to the core values of the organisation and acting in the interest of its workforce.

“Over the last 42 years, Peter and David have shaped Aardman into creative force, whose dynamic creative culture allows it to develop, produce and distribute unique and comedic films and series for audiences all over the world. EO is a perfect way of futureproofing that independent spirit and thinking, and allow us to protect the legacy whilst continuing to nurture new talent and ideas and diversify our storytelling into new areas of theme parks, console games and interactive content. I know I can talk on behalf of the whole board of directors in thanking the founders for the opportunity to be asked to be part of the board whom will take the company forward in the next exciting stage of its evolution”, said Heather Wright.

“We congratulate Aardman on its transition to employee ownership which is a great example of where the EOT model can be used to secure the businesses ethos, creative values and independence for the longer term while helping those who supported its creative success to share in the value they create. This has been an exciting journey for us to support David, Peter and the team knowing that Aardman’s iconic productions will continue to bring joy to fans new and old for many more years to come”, said Deb Oxley, CEO of the Employee Ownership Association.

Aardman was founded by Peter Lord and David Sproxton 1972 and since its inception has been committed to engaging audiences with compelling stories and characters through animation.

Based in Bristol, over the past forty years, Aardman has grown into a multi-award-winning global entertainment studio that encompasses film, series, video games, attractions, commercial advertising, interactive content and rights & brand development. The studio has won four Oscars and fourteen BAFTAs across both its short and feature films output dating back to 1989 with Creature Comforts. Aardman acquired a majority stake in New York based company Nathan Love in 2015 which focuses on animation work for the advertising industry.

Book: Aardman An Epic Journey, Taken One Frame at a Time, by Peter Lord and David Sproxton, will be published on 15th November by Simon & Schuster in the UK and the US. This fascinating and insightful behind-the-scenes story follows the extraordinary journey from humble beginnings to Hollywood told by the co-founders in their own words featuring a foreword by Matt Groening and an introduction by Nick Park.

Interactive multiplatform video games: 11-11: Memories Retold is a story driven narrative adventure set during World War 1 with a unique painted style which is a collaboration with Bandai Namco Entertainment and DigixArt. The interactive experience features the voices of Elijah Wood (The Lord of the Rings trilogy) and Sebastian Koch (Bridge of Spies) and is currently available on PlayStation4, Xbox One and PC.

Series: The Shaun the Sheep brand celebrated its 10th anniversary last year, with 150 x 7 episodes having been released since its inception airing in 170 countries around the world. In 2016, the television special Shaun the Sheep: The Farmer’s Llamas, won an International Emmy Award. In addition to the series, films and attractions, the brand has a massive social media presence, with over 400,000 subscribers across 4 YouTube channels and 1.5 billion views. Morph, one of Aardman’s most iconic characters, initially appeared in 1977 and celebrated its 40th birthday last year. In 2013, Peter Lord launched a KickStarter campaign to create new episodes of the character and launched the new series in 2014 on Morph’s Official YouTube channel.

With the support of Creative Europe’s MEDIA scheme, Aardman are developing a slate of brand new IP for children and families. Their focus remains on character driven comedy and they are working with new directors within the company.

Aardman launched a dedicated YouTube Channel, Learning Time with Timmy earlier this year in partnership with the British Council. The series consists of 26 five-minute episodes targeted at 2-6 year olds who are either learning English as a second language and very young native English speakers who are building their vocabulary and preparing for reading. There were 1 million views on the channel in the first month of its release.

3rd Party Content: Highlights from this year include their ongoing work with Alzheimer’s Research UK on their #SharetheOrange campaign, creating animation for two new shorts featuring the voices of Bryan Cranston and Simon Pegg. Aardman also teamed up with the Bill & Melinda Gates Foundation for their global campaign, “Malaria Must Die So Millions Can Live,” with a unique video narrated by Hugh Laurie and a ‘New Mindset’ – an animated short created to shine a light on mental health, voiced by Stephen Fry. Aardman also worked with BBC Two on their rebranding this year, creating an indent for the channel. In addition, they worked with the BBC to create BBC iReporter, an interactive online game aimed at youngsters aged 11-18 to help them identify false stories by giving students and teachers resources to use in classrooms across the UK.

Attractions: Aardman has multiple attractions at theme parks operating around the world including Japan, Sweden and Australia. Over the summer, Aardman announced a brand new Shaun the Sheep Farm Garden attraction to open in April 2019 at the English Garden Rosa & Berry, an English garden themed attraction in Tawada, Japan. A new Shaun the Sheep attraction is also coming to Paradise Country in Australia’s Gold Coast from December 2018, a park which gives visitors the chance to experience farm life. In Tokyo, a restaurant called Sunday Brunch continues to be popular with visitors for its Shaun the Sheep inspired dishes.

Aardman is exploring other areas for growth in this space including VR. In 2016, they partnered with the BBC to create the VR short film We Wait: A Migrant Story, a fictional story transporting the viewer to the heart of the Syrian refuge crisis.

In the advertising industry, Aardman continues to work with big brands across its UK and NY office including DFS, Chevron and Serta.

Wallace & Gromit’s Grand Appeal: Established in 1995, The Grand Appeal has raised £50 million to support sick children and their families in Bristol Children’s Hospital. One of their most popular initiatives is Gromit Unleashed 2, the award-winning charity sculpture charity trail, which returned to Bristol from July-September. The trail has so far raised £1.62 million for charity, with previous editions having raised over £6 million.

Exhibitions: The Art of Aardman exhibition is currently touring the world with stops in France, Germany, Australia, and most recently a second venue opening in Seoul, South Korea where it ranked no. 1 among exhibitions for the first half of the year.

Aardman Academy: Established in 2013, the Aardman Academy offers a number of bespoke courses developed to bridge the gap between education and industry, providing expert tuition at Aardman’s central Bristol studio. The flagship Certificate in Character Animation Course, run in partnership with the National Film and Television School is in its fifth year, and the Aardman Academy have developed a number of new courses and masterclasses to meet the needs of animation students, professionals and academics, across all disciplines in the animation industry.

For more on Aardman and Employee Ownership, please go to: