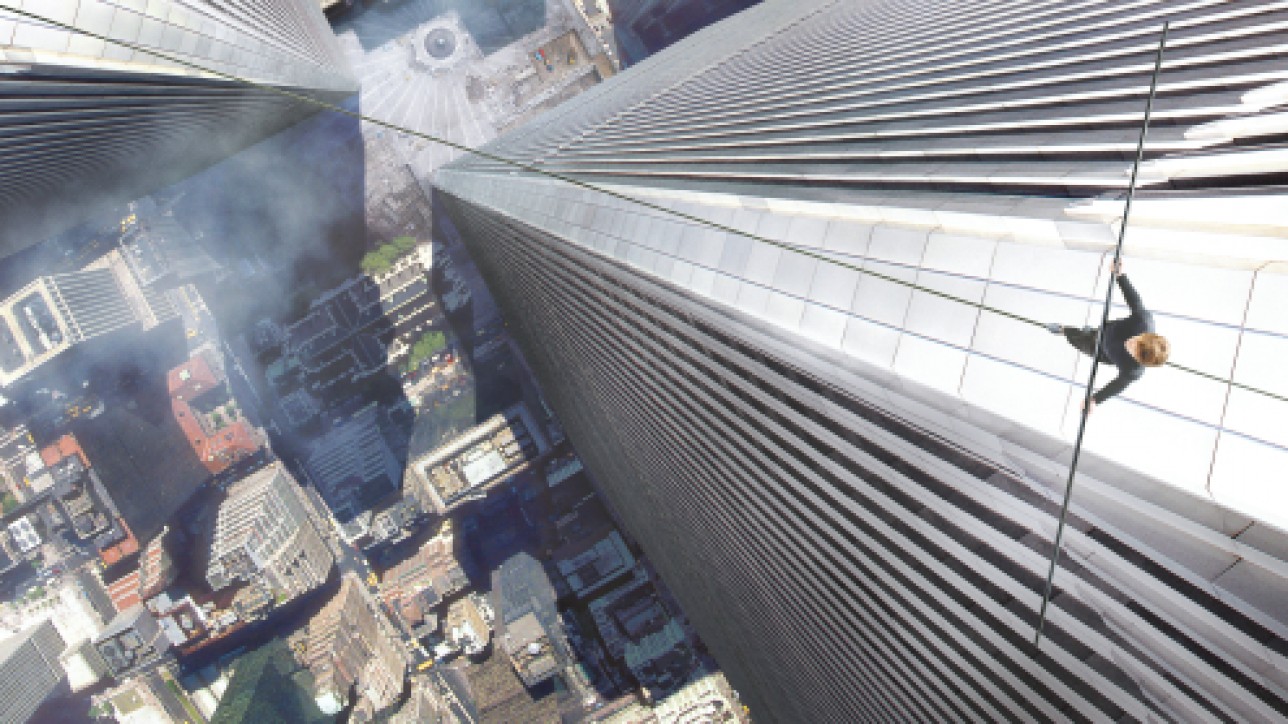 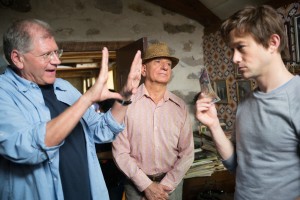 Is it true, that you stumbled upon the story by reading a children´s book?

Robert Zemeckis: hmmmhmm yeah, that is true! It was a small illustrated book called „The man who walked between the towers“ and I had no memory, you know, when this happenend. I wasn´t aware of it. I guess, I was in filmschool, so I was not connected to what was going on in the world. And that is where I first heard about this. From this childrens book. And I read on the back of the book, that it really happenend. And I then started to research it and I was amazed by the story. 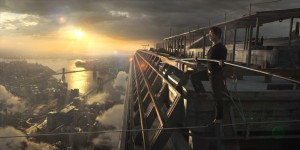 Tell us all about the grammar of 3D stereoscopic filmmaking.

Robert Zemeckis: You know, first of all, you know it is been around since the 1940ies 1950ies. BUT: It never could really work because film was projected mechanically and now with the advent of the digital projection where the image never moves, 3D now can work and be functional. And then of course the adcancement like laser projection in IMAX it is even better because the image is even finer. So the digital projection allowed 3D to finally work. So my feeling now is that all films should never be in 3D, that 3D is a dramatic choice, an emotional choice.
And it should be organic to the story that you are gonna tell. This always felt like this was a story that was made for 3D.
The movie I made prior, Flight, I would never think of that should be in 3D and then when you do make a film in 3D you have to make it, you have to be aware of the 3D throughout. The problem that we have in Hollywood is that films are just converted after the fact and they are not designed to be 3D movies and so they actually do notwork and when you take your 3D-glasses of and watch a converted movie you will see many times they just turned the 3D off. Especially if there is a lot of fast editing or, you know, there is a sequence that has a lot of action. 3D is a very specific type of
filmmaking so you have to be aware of it with every single shot that you do! 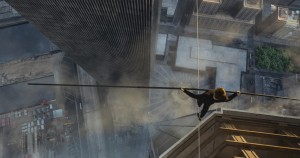 The narrative point of view of your film is interesting – the main character tells us the story directly into the camera with hindsight!

Robert Zemeckis: You know, the way I always saw the walk and by the way I started developing the walk 10 years ago, prior to the documentary „The Wire“ – my feeling of it is that it was a stylistic choice, I consider the walk a painting, a rendering of what happenend, rather then a blueprint of what happenend. It is sort of there is nothing you could, there is no way that you can make a narrative dramatic film without taking license with reality. So the question is, what are those choices. And you have to make choices and you have to say, this is the part of the story I feel, what I want to present . .

What choices did you make?

Robert Zemeckis: This is the very first film I made about a real person. But I understood from the very beginning, he was sceptical, but I understood, what was important to to him, is that the walk would be portrayed the way it really happenend. Then I vowed to him, that I would do that. And I kept that promise and I explained to him that the early part of your life and the coup has to be shorthand. The story is way to ponderous, it would have never worked as a narrative film.. So he understood and he loves the movie. It worked out wonderfully. 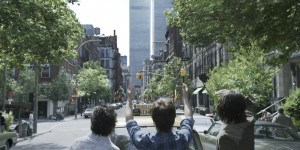 Robert Zemeckis: My feeling is, that is how all technology should be used to render something artistically. In mean, you never want the technology ever to get in the way of what you are trying to do. You know the technology is always there to enhance what you are trying to do emotionally. It should! That is what it is supposed to do! A lot of times it gets confused. But you know it has always been a confusion in this artform because you know, filmmaking is a very technical artform, it always has been from the very beginning. And it continues to evolve. And it will never leave, this will always be, it will be always a balance. And it forms the language of cinema and it keeps changing things. And so I am always someone who is of this two points of view. One is, I am always looking for new tools. But then I always want to remember what my job is. My job is being a „quaintly say“  filmmaker even so there is no film anymore. It will always be in service of the emotional story in my opinion. Always in the service of the emotional story. 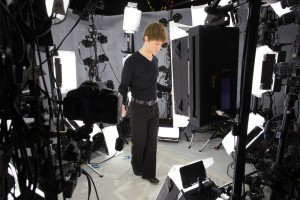 How big is preproduction in way of work. All those brilliant ideas like the shot from the newspaper to Philippe or the gradually turning from black and white to color when he starts to tell the story- it seems you are writing your screenplay already in a big storyboard?

Robert Zemeckis: Oh, well that is interesting, because I did do a very unusual approach, you are very astute, because how I formed this film is something I have never done before. What I did was I took the real Philippe, and I put a camera on him in front of a green screen. And I interviewed him for days and he is a magnificent storyteller, and so as you can see if you saw the documentary, he is a very good storyteller. And he would just talk for days. And I took all that material and then I put the markers, the motion capture sensors on him. And in the volume the real Philippe recreated the walk- I captured that. And so then I , between the interviews and the performance capture I did and then with photographs and that, I put together a complete animatic of the story and then I took that and transcribed that into a screenplay. So those devices like you know, having the towers in the foreground (in the newspapers), I worked all that out , so I basically wrote the screenplay visually and then I transcribed it to paper. It is the first time that I have ever done that. I made the film using the tools that we have…

How do you keep on the edge of all those new technologies, of what is possible right now?

Robert Zemeckis: I really do not pay much attention to it, really! What I do is, I always present a challenge to my technical team. I say we have to do the thing, where…- we are going to do a scene, where he is doing a thing like this and this and this… And I ask: „So what can we do to make itß“ I challenge my team and say: „How can we do this and present this in a way that we maybe have never seen before? What can we do?“ And then start just getting ideas and figure out how to use the tools that we have. I mean, I love new tools. I think they are wonderful to use. I mean obviously that thing you have to do is to restrain yourself. And you have to be a magician. And you have to mix it up. You can´t just use one technical technique because then you see the trick. As a filmmaker you have to take your cues from a magician who is a live magician and have to change the illusion to keep the audience of base and so you do not use one form of visual effect you use everything that has been done all through film history. The only visual effect we did not use in the Walk is cartoon animation because there was no reason for it. But we used everything else. 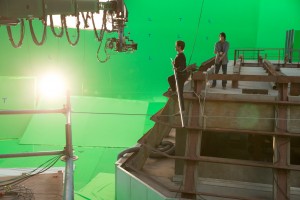 Have you ever considered to to transform your Back to the Future Movies to 3D?

Robert Zemeckis: NO! Because I believe that films are historical documents. I do not believe in going back and digitizing and changing guns into walkie talkies, I think that they are entertainment (for the audience of) when they were made and in this moment they are historical documents. And by the way. The Back to Future Movies would be very good in 3D. But still I would not do it. They are filmed very similar to how I would make a 3D movie But I did not think of it when I was doing it. But after that fact I know they would look good in 3D.

What are you going to do on October 21?

Have you placed a bet on the Chicago Cups?

Robert Zemeckis: Actually I did! I bet on them to win the World Series. I do not know if I am goint to win, but I had to make what we call an emotional bet. I was in Las Vegas and I went to the sports bookee back in may. And I bet on the Cups to win the world series this year just to put that energy out there. So if they win the wild card game it will be a first good step. But it is a a one shot deal. If they loose they are out.

Ben Kinsgley plays a brilliant part as the mentor, he is grounding the movie against the VFX.

Robert Zemeckis: Right! You know it is really important and it is almost mythological. But it really happened. But it is a mythological device for storytelling, there is always the apprentice and the master. And you see that in dramatic stories all the time. But in this case it was true, very similar as how it was portrayed in the movie.