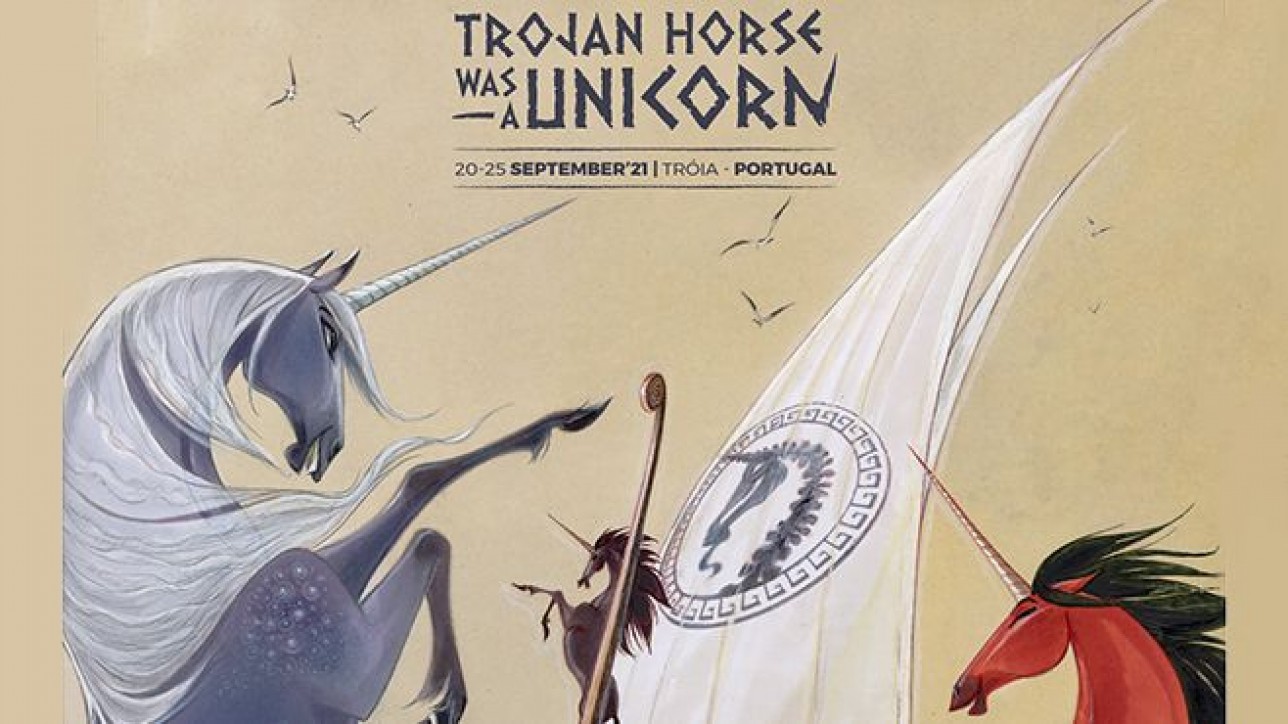 Trojan Horse Was a Unicorn (THU)’s internationally acclaimed Main Event is one of the world’s leading transformative experiences for digital artists and creative professionals.This year, the Main Event’s physical edition returns to Portugal, taking place in Tróia, Portugal, from September 20-25, 2021, after the last two editions were hosted in La Valletta, Malta.

The program features a feast of inspiration and learning resources with talks, mentorships, demonstrations, recruitment sessions, special activities to break the ice, and the Gallery, where the Tribe can observe and learn from talented artists in action. Top artists and creators from all over the globe share their knowledge about diverse areas from the entertainment industry, such as 2D, 3D, illustration, character animation, VR, Animation, Graphic Design, VFX, Business, Technology, Sound, Sculpture, and painting, among others. Over the last years, THU made an effort to include more disciplines so that synergies among professionals of different backgrounds could take root.

Over 30 world-class creators are expected this year (see full list), including:●Ami Aniobi, writer, director and Executive Producer, best known for her work on HBO’s groundbreaking, Emmy-nominated comedy “Insecure”. She also co-created, co-directed and starred in the web series, “Lisa and Amy Are Black,” “Misadventures of Awkward Black Girl.”●Andrew Gordon, has been working in the animation industry professionally since 1994. Starting at Warner Brothers Classics, he later joined Pixar Animation Studios where he spent 20 years animating on such films as A Bug’s Life, Toy Story 2 and 3, Monsters Inc, Monster U, Finding Nemo, Finding Dory, The Incredibles and Ratatouille, among many others. He later helped start the Feature Animation Division at DNEG London as Head of Character Animation.

●David Prescott’s career has spanned three decades focused on creative innovation in advertising, film and animation. As SVP Creative Production for DNEG Animation, David oversees all creative aspects of production for DNEG’s animation studio, devoting his creative energy, experience and innovative vision to helping filmmakers bring new ideas to the screen.●Eugénie von Tunzelmann, an engineer and VFX supervisor who made the move into theme park rides 6 years ago, following more than a decade in feature film VFX, during which she simulated ectoplasm in Hellboy II, Death Eaters in Harry Potter, thermite in Iron Man 2 and black holes in Interstellar.●Kris Pearn, Animation Director and Producer at Sony Pictures Animation has spent most of his life making cartoons for both film and television. His credits include: “Open Season”, “Shaun the Sheep”, and “Cloudy with a Chance of Meatballs” to name a few. He has most recently written and directed the Netflix animated feature “The Willoughbys”.●Marc Simonetti, an artist who worked for over 15 years on cover arts (Dune, Discworld, Lovecraft), video games (Ubisoft, EA, Sony), card games (Magic: The Gathering), and movies (Valerian and the City of a Thousand Planets, Maleficent 2, Aladdin). Renowned for the Iron Throne he made for George R. R. Martin on Game of Thrones.●Tyree Dillihay, a director at Sony Pictures Animation. Dillihay spent eight years as a director on Fox’s animated hit sitcom, “Bob’s Burgers,” with 32 episodes and two consecutive Primetime Emmy® nominations to his credit. Some of his other past director credits include a wide variety of animated television series such as Netflix’s “Da Jammies,” Fox’s “Allen Gregory,” and MTV’s “Good Vibes.”.●Varun Nair, an Indian Artist currently living in France. He graduated from the Gobelins School of Image in Paris and has worked for several companies in the Animation industry. His clients include Netflix, Sony Pictures Animation, and Blue Sky Studios, to name a few. Currently, he is a Co-Director and Visual Development Artist at Illumination.●Yuko Shimizu, award-winning New York-based Japanese illustrator and instructor at the School of Visual Arts. Her illustrations have featured on the covers of DC Comics, in The New York Times and Time, on Gap T-shirts, murals in New York City, and Pepsi cans.

For those who want to find a job at the event, the first two days are dedicated to Recruitment sessions. Outfit7, Skydance Animation Madrid, DNEG, Cloud Imperium Games, Lightheart Entertainment, and Wildlife Studios are already confirmed with more companies soon to be announced. To ensure maximum safety, the event will comply with all measures put in place by the Portuguese government. Anyone attending must fulfill the requirements needed to obtain an EU Digital Covid Certificate. Additionally, THU will conduct testing prior to checking in at the Main Event, and only participants who have a negative test result will be able to attend. As for our venues, all rooms will be, at most, at 50% capacity; there will be a heat check at all entrances; surfaces will be sanitized before and after each talk or activity, and most importantly, the schedule includes 30% more outdoor time.

ABOUT TROJAN HORSE WAS A UNICORNFounded in 2013, THU is on a mission to empower creators through access to opportunities and inspiration, opening the door to a creative world. More than aglobal brand that focuses on technology, art, and creativity, THU is a networking ecosystem that brings together all players of the digital entertainment & interactive industry.