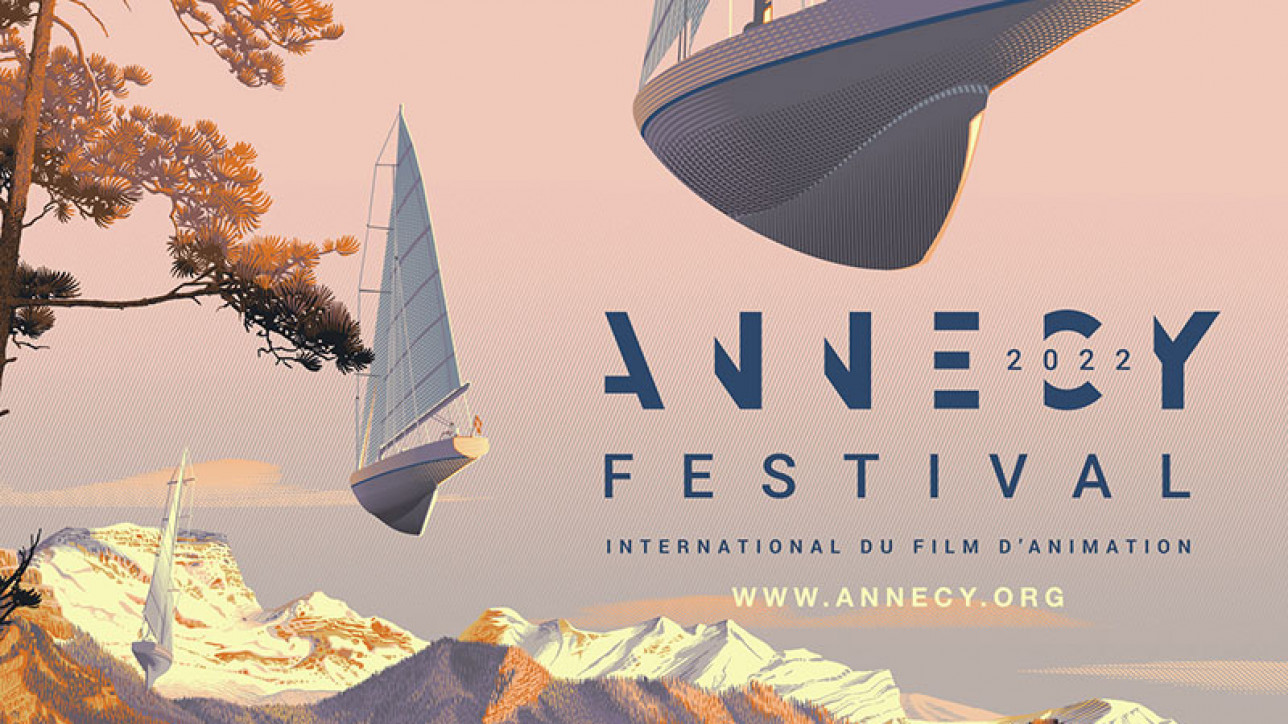 For this new exciting year, and all the events returning on-site, the Festival decided to call on a celebrated illustrator and poster aficionado known for his alternative posters, especially for cult films. His work is acknowledged by greats like Francis Ford Coppola and Steven Spielberg.

The artist Laurent Durieux awakens the imagination by telling a story in one image using both a retro and futuristic style. His instantly recognisable universe takes us on a beautiful journey whose destination is: Annecy, its lake, and the Festival!

It’s all there: the lake of course, animation and its continuous movement, but also in quiet subtlety, neighbouring Switzerland, whose animated creation will be in the spotlight this year. 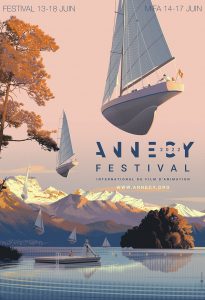 „Working with Laurent Durieux was a dream for the Annecy team. His exceptionally refined poster captures your attention and draws the eye in to explore the illustration’s details up close. The play on light and colour radiates a great sense of calm. So, let’s set sail on the animation yacht!“

Working as an independent designer since 1994, Laurent Durieux is noticed in 2011 with his François à l’américaine poster, created for an exhibition commemorating the work of Director Jacques Tati, subsequently he is contacted by several American publishers and galleries, including the Mondo gallery, based in Austin, Texas, for whom he has since produced alternative film posters.

In 2015, he produces the poster for the 42nd Telluride Film Festival (Colorado, USA).

In 2017, he is contacted by the Utopiales Festival team, to create the poster for its 18th edition. During this festival’s edition he has an exhibition dedicated to him.

In 2018, his friend François Schuiten requested him to do the original colouring of the comic book Le Dernier Pharaon (The Last Pharaoh), released in 2019 – from the Blake and Mortimer series –, written by Jaco Van Dormael, Thomas Gunzig and François Schuiten, and illustrated by the latter. The same year, he exhibited a dozen new screenprints at the Mondo Gallery in Austin, Texas. Among these is a poster for Apocalypse Now, which will be used as the official visual for the film’s rerelease in cinema theatres worldwide.

In 2021, a retrospective in his honor was held at MIMA in Brussels (Millennium Iconoclast Museum of Art), as well as a smaller-scale exhibition at the Forum des images in Paris.

The Festival team are preparing a 100% on-site edition, and look forward to seeing as many as possible of you attending from 13th to 18th June in Annecy!
Get your accreditations now, and benefit from the last days of the Early Bird rates!