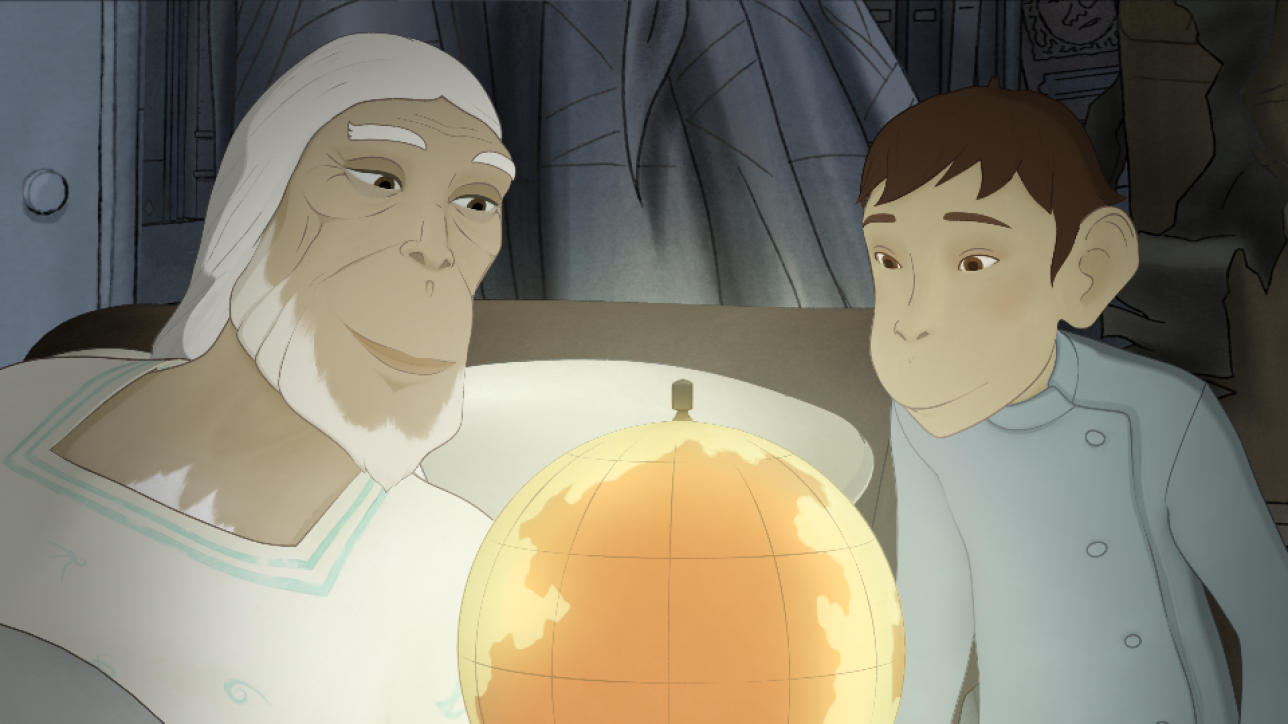 “We are very proud to present to the Annecy public the preview of the new film that Jean-François Laguionie made with Xavier Picard”, said Armelle Glorennec, producer and CEO and Eric Jacquot, President of Blue Spirit.

“And we are extremely happy to be at his side precisely in the year that this prestigious festival decides to honour this talented author whose we have the pleasure of having produced 2 of his films”.

In 2009, Blue Spirit Productions made its first foray into feature production with Le Tableau (The Painting), the 4thfilm of one of the masters of worldwide animation, which was released in 2011.
As soon as the film was completed, Armelle Glorennec and Eric Jacquot proposed to Jean-François Laguionie to imagine what happened to the Prince of Le Château des singes (A monkey’s Tale), one of his previous films. That’s the starting point of Le Voyage du Prince (The Prince’s journey), a sort of sequel of the one released in 1999.

“We are finishing the production of the Prince’s Journey, our 3rd feature film, in the year of our 15th birthday… The preview screening in Annecy is a great way to celebrate our anniversary, one month before the date!” add Glorennec and Jacquot.

Le Voyage du Prince (The Prince’s Journey), which will be released in theatres in France on December 4 (by Gébéka Films), will be presented in Special Session at the Annecy International Animation Film Festival, next Tuesday, June 11, at 8:30 pm.

Written in the form of a travel log, the film starts with the discovery of the Prince who has been shipwrecked on an unknown shore. Injured and lost, he is found by Tom and is taken in by his parents, two researchers in exile. The Prince, guided by his young friend, discovers with enthusiasm and fascination a society which nevertheless appears as stiff and ossified…

Created in 2004, Blue Spirit Productions, Newen’s subsidiary,produces animated films and series with its own studios in Paris, Angoulême and Montreal.

In terms of series, Blue Spirit Productions has producedThe Mysterious Cities of Gold (3rd series in production for France TV),Loopdidoo (5 seasons), UFO (2 seasons),Little Chicks, and is currently working on two original creations with Alice & Lewis (in production) andArthur & the children of the round table (being delivered to Canal+ and SWR). Original creations and adaptations of books have enabled Blue Spirit to experiment with new techniques and enrich their knowhow, and also strengthen their links with national and international broadcasters.

Most recently, the two series in development,Splat & Harry (under the Just Kids label) and The Borrowers, adapted from the novels by Mary Norton, met with great success when they were presented at the last Cartoon Forum and MIPCom Junior.

On the cinema side, Blue Spirit Productions has worked on feature productions supporting auteurs with a particular proposition, such asThe Painting by Jean-François Laguionie (nominated for a CESAR in 2012), followed a few years later by the multi-award-winningMa vie de Courgette (My Life as a Zucchini) by Swiss director Claude Barras (CESAR 2017 for Best Animated Film and Best Adaptation, Feature Film Cristal 2016 and Audience Award at the Annecy International Film Festival, an award-winner at the Emile Awards and nominated for the OSCARS, the GOLDEN GLOBES and the BAFTAS).

The collaboration with Jean-François Laguionie is continuing withLe voyage du Prince (co-directed with Xavier Picard) due to be released late 2019/early 2020.

Today, with the development ofThe Ballad of Yaya (under the Sinematik label), adapted from the graphic novels published by Fei, Blue Spirit is aiming for a broad audience while maintaining the defence of its artistic qualities. This film marks a new dynamic in the production of features in the Group.