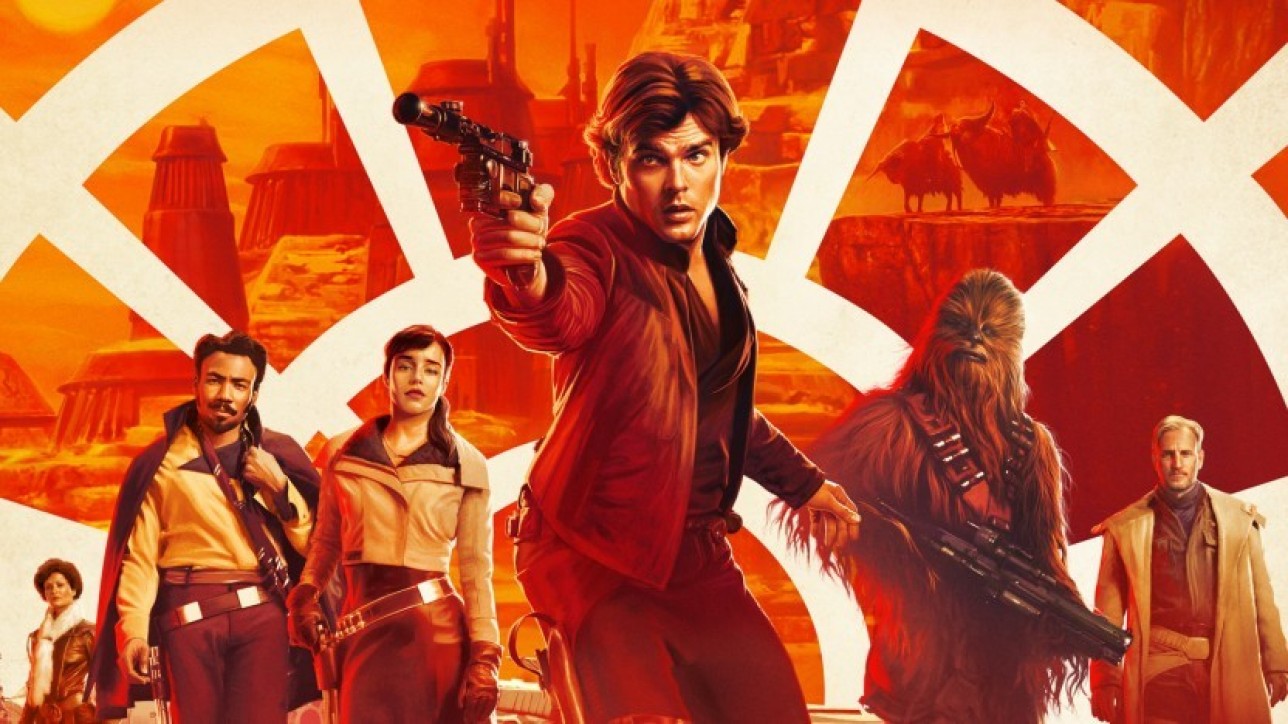 Solo, a film that some of us have been waiting for, for longer than even Prequel fans exists. A film that started in controversy from the second it was announced. Who plays Han, who will direct Han, what timeline will it be in?! Such young directors! Then a new director, an older much more seasoned one! And so on and so on. As it, nowadays, goes. Fan-entitlement is a given, Fan-service is frowned upon and everybody is a fan and has been since birth. I remember the time when you were laughed at for being a Star Wars fan. Some of my very earliest and most vivid memories are Star Wars related. 37ish years ago. That crummy VHS tape, Luke staring into the distance the Twin-Suns above him, John Williams epic music playing (which still to this day gives me goosebumps hearing it). So yes, I am one of those. Less cynical, a bit more fanboyish, now lets get into it.

Solo was everything I hoped for and then some. Every button was pushed that needed to be pushed. Alden Ehrenreich, of Hail Cesar fame, plays „our“ beloved Han Solo so well. He most importantly does neither imitate Harrison Ford playing Han Solo, nor does he go overboard in the attempted to make Character his own. With wonderful nuance and skill he gives the Charakter more depth and allows us to bond with Han more than before. A good script can get you just so close to connecting a long loved characters past to its well known future, but it needs a bit of the actors heart and soul too and Ehrenreich gives us exactly that.

From Han Solos dreams and struggles to his distinctive charm and way of handling hairy situations. From being taken in by Tobias Beckett to growing his character and standing his own. The movie also gives us nice and small nods and hat tips to the original Trilogy. May it be the way a shot is framed and set up to parts of the script to little set details or extras.

And then we have Donald Glover, man, in the trailers it seemed to me that it would be a more… „Glovery“ Lando Calrissian, but Donald Glover, as Ehrenreich did, brought his Character to life in a way I was not expecting. Gave Lando a beautiful backstory and life. That could have gone very differently. In both cases. I always liked Lando, but never was in love with the Character. He gained a lot of Space-Cred with me through Solo, that’s for sure. And I can only support the calls for a Lando Film. It’s difficult to get more into it without giving away plot details, but I love how Lando is portrayed and how that connects to Empire.

Solo takes us way back, as we expected, but just enough to keep the flow sharp and snappy. It does at no point get lost in useless or too detail oriented bit and pieces, brings us rich characters and just understands how to deepen our feelings for Han, Chewie and the rest of the crew. It knows how to tiptoe on the fine lines of bringing us a rich world, without getting lost in unnecessary details, but even for a master like Lawrence Kasdan at some point there must be a decision on which characters to focus on and try to do the impossible. I love that the man who brought us the best Star Wars film ever made (The Empire Strikes Back), also brings us the freshest Star Wars movie yet.

I am no expert when it comes to VFX, but overall nothing stood out to me negatively or took me out of the experience. In general I loved how the whole look of the film on the one hand felt like Star Wars and on the other stood for itself. Even more than Rogue One did.

As for the rest of the Cast, from the always wonderful Emilia Clarke, to Woody Harrelson and Joonas Suotamo, who is such a worthy successor to Peter Mayhew, everyone shined in my opinion. And I loved the Enfys Nest/Lexi Character and actress. I would have loved more of her. Last but not least let us not forget Paul Bettanys Dryden Vos, who brings us a nice insight into the society of the Star Wars universe and kind of connects to the whole Casino idea from TLJ without the annoyance actually. Ok I lied! Last and for sure not least is Phoebe Waller-Bridge playing L3-37. Who I would love to see in a buddy movie with K-2SO actually. She is funny, witty and full of heart. Just a wonderful addition to the already fantastic variety of Droids.

It is not all fun and games as one could expect with a movie about a stuck up, half-witted, scruffy-looking, Nerf-herder. We get some quite emotional and surprising scenes too, as one would hope. It made me love this film so much more and just makes it a better story.

What a very enjoyable movie. In no small part thanks to Kathleen Kennedy for having the foresight to get Ron Howard on board, who brought the film back to the scripts initial direction. And even though it is more common than most people would think, switching your director in the middle of shooting a Film like this can be a death sentence, but sometimes it will also save it, make it better and as the legend Ron Howard is he did deliver.

In size and magnitude Solo feels a lot like its cousin Rogue One, and it is a great adventure film set in one of the most fantastic universes ever brought to the silver-screen. It has everything a Star Wars film needs, it opens the possibility for more Solo, but also for so much more. Less grand and less epic Star Wars, which, if you ask me, could be a great thing. Lucasfilm basically took a lightsaber to the vault that is the Star Wars Universe and ripped that sucker wide open. Making so many wonderful things possible. And I know what you think, Star Wars fatigue. Just like Comic-book movie fatigue is, in my opinion, way overrated. Yes we have a lot of super hero movies, we have now and will get soon more and more Star Wars movies, but also think of the following. Especially with movies like Solo, that in fact are set in the Star Wars universe and are not typical Star Wars movies. Solo is a wonderful adventure movie and future Star Wars movies could divert even more from the typical universe patterns. At least there is the possibility. And I mean how many period pieces about the Civil War have we seen and keep getting. Or RomComs set in the present etc etc. It is also in the hands of the filmmakers who are not making Comic-book or Star Wars movies at the moment to brings us other wonderful stories that capture our imagination and attention. It is a business after all and the market regulates itself pretty well, normally.

I can only recommend Solo to everyone. Not everyone will be as excited as I am, but I cannot see many hating it besides the most cynical of Star Wars/sciFi/Movie fans. Of which we have a lot these days of course, but I do not count those as real fans of anything anyway.
Go in, have fun, and maybe even watch it again. I know I will.