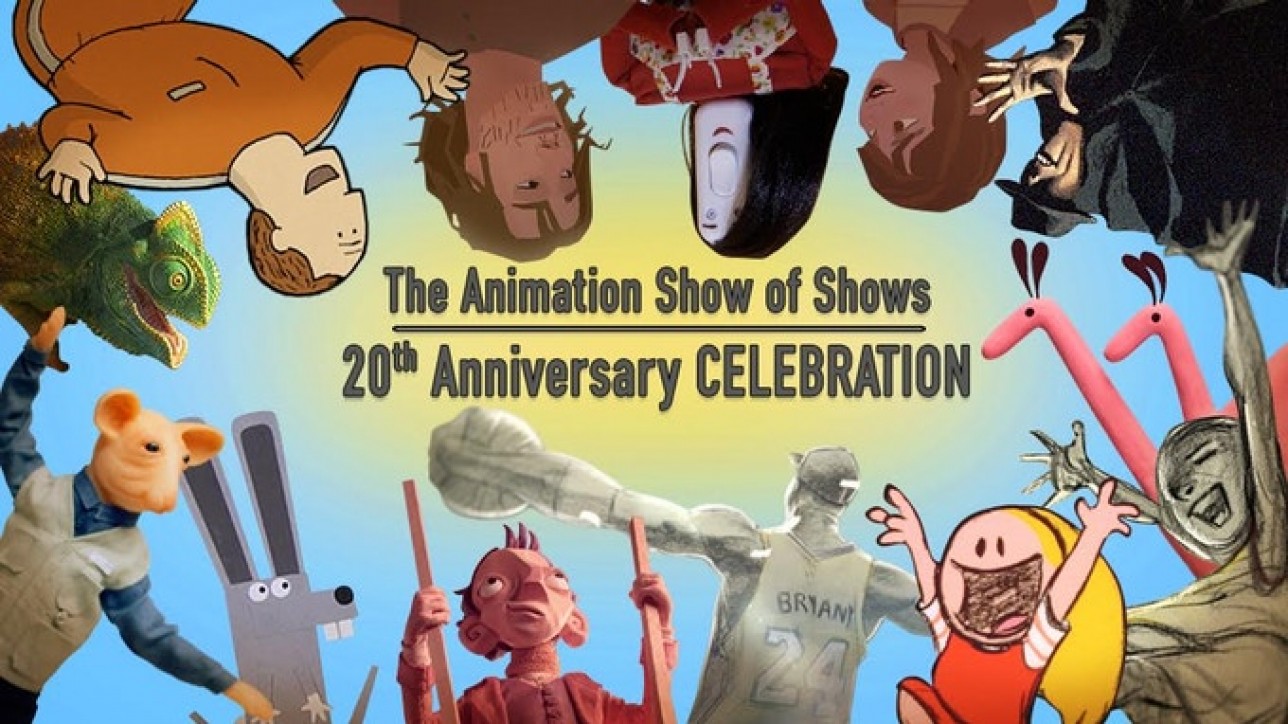 The Animation Show of Shows (ASOS) is an annual event in which the world’s best animated short films are curated and presented in one feature-length film, to audiences worldwide. The ASOS brings animated short films to homes via streaming and DVD, and to the BIG screen in theaters around the world. It has been its mission and privilege to shine a spotlight on the brilliance of independent animators, support and preserve an important art form, while providing a moving cinematic experience for audiences.

We curate and produce an annual feature length film, comprised of the best and newest animated shorts. Celebrating our 20th anniversary

This is our 20th anniversary!

We are amazed, excited, grateful, and filled with pride. We feel our 20th anniversary is a historic milestone, and accordingly, we are celebrating.

Thanks so much for visiting, we hope you join our celebration, and thanks in advance for your support!

The Animation Show of Shows is a 501(c)(3) not for profit organization, and by virtue of this status, pledges made to this campaign are tax-deductible, to the amount and extent allowable by law. See the FAQ’s below.

ABOUT THE ANIMATION SHOW OF SHOWS

Continuously since 1990, Ron Diamond was producing animation, marveling at the talent he was discovering – not just locally, but across the globe. Ron perceived that independent animators were producing short films that were poignant and brilliant, but despite their brilliance, these films often went unnoticed in the U.S. Ron also felt that animated shorts, more than any other genre of film, took on the personality of their creators.  Because of this, they tended to evoke greater emotion and really connect with their audience.  He wanted to share this wealth of great animation with the wider animation industry. In 1999, he produced the first-ever Animation Show of Shows.

During the early days of The Animation Show of Shows, Ron built on his relationships with animation festivals, studios, and leading college programs, which enabled him to discover still greater talent for inclusion in future shows. Each year, after curating the newest edition of the ASOS, he shared it with top animation studios, game and technology companies, and schools, helping to foster greater awareness of budding and amazingly talented animators.

The Animation Show of Shows continued to grow in size and status, and began to garner industry acclaim.

In 2015, Ron felt it was finally time to take the show to the public. The Animation Show of Shows became a 501(c)(3) not for profit and ran its first campaign on Kickstarter to help fund an expansion into theaters and other public venues, and to allow the newly-formed not for profit to pay advance monies to the filmmakers for worldwide rights.

Thanks to generous support from industry professionals, students and fans of animation, the 17th Annual Animation Show of Shows premiered at venues in 47 cities, 4 countries, for a total of 435 showings. Since then, its reach has grown and fans of animation continue to support, through successive Kickstarter campaigns, the expansion of the Show into more venues. Every year since the 17th edition, those numbers have nearly doubled. The 19th Annual Animation Show of Shows is playing in theaters in North America with plans for additional international and educational expansion …

TWENTY YEARS – WOW! HOW TO CELEBRATE?

We are also offering new and different Rewards, some that we’ve never offered before.

„THE BEST OF“ COMPILATION

Our  Best Of show will also be seen in theaters.

Some of the finest animated shorts that have been selected for inclusion in the Animation Show of Shows hail from talented animators in places you wouldn’t expect. Says Ron: „The true global nature of the animated shorts and their makers are among the most fulfilling aspects of what we do.“

The principal language of the Animation Show of Shows is English, but the 17th edition has been subtitled into French, Italian, German, Spanish, Polish, Japanese, Mandarin, Korean, Vietnamese, and Russian.

Here are a few of the wonderful films featured in recent ASOS shows, from talented animators across the globe:

The Animation Show of Shows not only looks across the globe, but also „outside the box“ for top-quality animated shorts that are distinct, innovative, unique, experimental, and diverse – whether in content, style, or in other ways.

The Animation Show of Shows has been proud to highlight films that pioneered or mastered innovative animation techniques.

IN SEARCH OF BUDDING TALENT

The Animation Show of Shows maintains relationships with colleges and universities, especially focused on students pursuing careers in animation. We feature truly exceptional student films in our curatorial process. We always offer a special spotlight on accomplished student films as rewards at inclusive pricing.

CREATOR COMMENTARY ON THE MISSION: EXPANDING AWARENESS AND PRESERVING AN ART FORM

„Sitting in a dark theater, discovering a truly great and powerful film for the first time is an incredible experience. I like to think that we bring that same incredible feeling to our public and academic audiences. As I reflect back on the past editions of Animation Show of Shows, I recall the same excitement and enthusiasm for all those audiences. Our preservation efforts in restoring animated shorts introduces our audiences to „new older“ films, which we feature in the same way they were intended to be seen when they were new.“

„I’m truly honored to be celebrating 20 years of the Animation Show of Shows. It’s been fulfilling to be entrusted by the filmmakers with their films and by the audiences with their time. It’s also very difficult, and what I mean is – these works are often by young animators, always brimming with passion, overflowing with talent, but lacking in money and anticipating being discovered. As the number of films produced each year has grown, the process of selecting which films to invite in the show has become tougher. I often wish I could include more films, and add to my support and appreciation for what these young artists can create. The support we have been able to show for the independent animator is a direct result of the support we’ve received on Kickstarter and from the community of fans of exemplary animated shorts. We will continue to do what we do, and hope you will continue to support our efforts, our shows, and the animated short film. Thank you for the opportunity to have this celebration.“ – Ron

If you’ve got questions, we have answers! Ron and her team are pleased to engage and respond. At the top of the page on the left there is a small round logo – click that, then click CONTACT ME to send us a message. We’ll get back to you!

Making a full length feature film, composed of animated shorts or otherwise, is a challenge for anyone, even for a major studio. It is a substantial endeavor, with many moving parts. Independent film producers more than most know there will be unexpected surprises along the way. We can not guarantee that all films seen in theaters will make it to versions seen on other platforms, these restrictions are usually associated with studio and higher budgeted productions that are often accessible on other platforms. All this said, we will make every effort to make the entire show available as it was seen in theaters.

Our risk is mitigated because we are not creating a film from scratch, we are acquiring films already made. It is still a Herculean effort to seek them and secure them, clear rights, and there are many elements and considerations to the curation process.

Over the years, we’ve done what we had to do – raising and/or borrowing money, financing some of the production, marketing and distribution from limited personal funds, etc. Each year we not only produce the show, but we expand its reach via showings in more theaters and more alternative locations.

But this is not Ron’s first rodeo, so to speak. It’s the 20th annual show, and we’re proud of that. This tells you all you need to know about the scope of work, time frames, and budgets all being reasonable and known to us. Finally, this is a work borne of mission, and personal passion.

We can say with total confidence – when the Kickstarter campaign succeeds, this show will be made, as will the „Best Of“ show, and all rewards will be delivered fully, and on a best possible timely basis.

Thanks for your support.