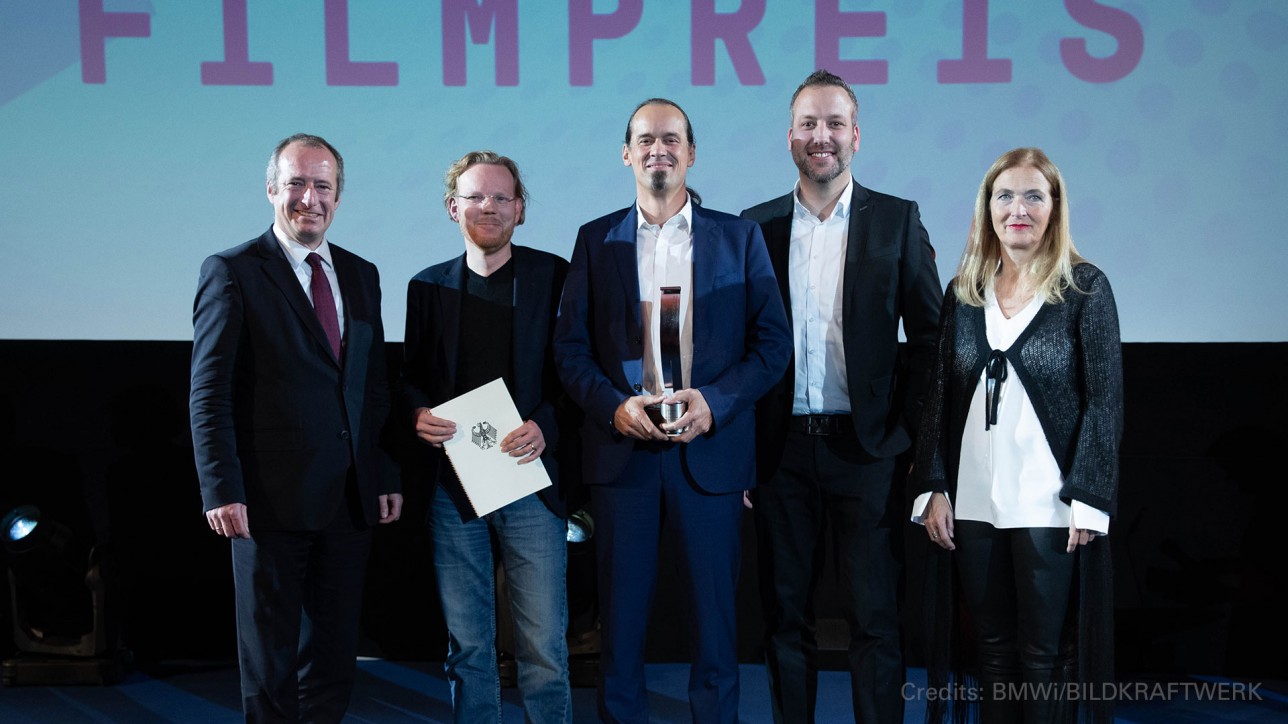 Stuttgart, November 21, 2018 – Yesterday evening the German Business Film awards were presented at the Kino International in Berlin. The German Federal Ministry of Economic Affairs and Energy recognise the best films from the field of modern industry and services in Germany. The business film awards have the goal of promoting the understanding of economic interrelationships in society. Since 2008 it has been part of the German government’s cultural and creative business initiative. For the first time since 1968, the jury presented a jury award which went to Mackevision Medien Design GmbH. The CGI experts from Stuttgart were recognised for their innovative power and outstanding business performance.

“We are incredibly proud to receive this award and would like to thank the jury of the German Business Film awards for this special recognition”, says the CEO, Armin Pohl. “Mackevision is definitely something of an exotic figure in the film industry. Because we are neither a classic film production company nor are we a typical post-production company as we were when we started almost 25 years ago. In the meantime, we have become the CGI world market leader and solution provider. We stand for technology, creativity and innovation – globally and for a diverse range of industries.” Utilising state-of-the-art digital technologies such as computer-generated imagery (CGI), visual effects (VFX) along with augmented and virtual reality (AR/VR), the company develops creative and emotional image content, transforming data into virtual applications and immersive product experiences.

“The heart of our services is the ability to create ‘digital twins’ of real products such as vehicles, aircraft, consumer goods or machines for visualisation purposes. We primarily utilise the digital twins to generate visual content for our industrial customers’ sales and marketing. In the process, we provide the essential foundation to create fascinating connections between brands and their customers. However, digital twins also optimise product development processes, deliver greater efficiency when operating systems and also simplify the coordination of conflicting goals in complex systems – to name but a few examples. As such, we offer diverse industrial sectors true added value and also serve as an important partner for Industry 4.0”, says Armin Pohl, explaining Mackevision’s success. The digital twin is a virtual representation of a real process, service or product. The process enables companies to visualise almost anything and there are almost no limits: from machines to factories, from cars and their driving characteristics to entire cities – everything can be recorded and digitally recreated by computers. Developers can then modify functions, test new settings or configurations and run complex simulations in a fraction of the cost of conventional approaches.

Every year, Mackevision also leaves a lasting impression on national and international film productions as a world-renowned visual effects producer. Mackevision utilises virtual production technologies such as nCam to create extensive digital environments. The augmented reality solution is based on a game engine. It simultaneously combines computer images with real footage, enabling film and television directors to place virtual objects directly into film scenes in real time. This visual communication helps the entire film crew with the timing and assists the interactions between actors with CG characters and CG environments.

The film production highlights in 2018 included work on the feature film “Jim Button and Luke the Engine Driver” for which Mackevision won the animago AWARD for “Best visual effects”. The “Best Friend” short film for the German animal rights organisation PETA kicked off a new character pipeline. This expands the already successful VFX portfolio consisting of digitally created backdrops (matte paintings), mass scenes (crowd replication) along with challenging water simulations. “Best Friends” was nominated for this year’s Epica Award in the category “Best visual effects” and also for the animago AWARD for “Best visualization”. This year’s highlights were rounded out by the Emmy nomination for Prof. Juri Stanossek, VFX Supervisor at Mackevision. Together with other VFX supervisors, he was nominated for the Emmy in the category “Outstanding Visual Effects” for the Netflix series “Lost in Space”.