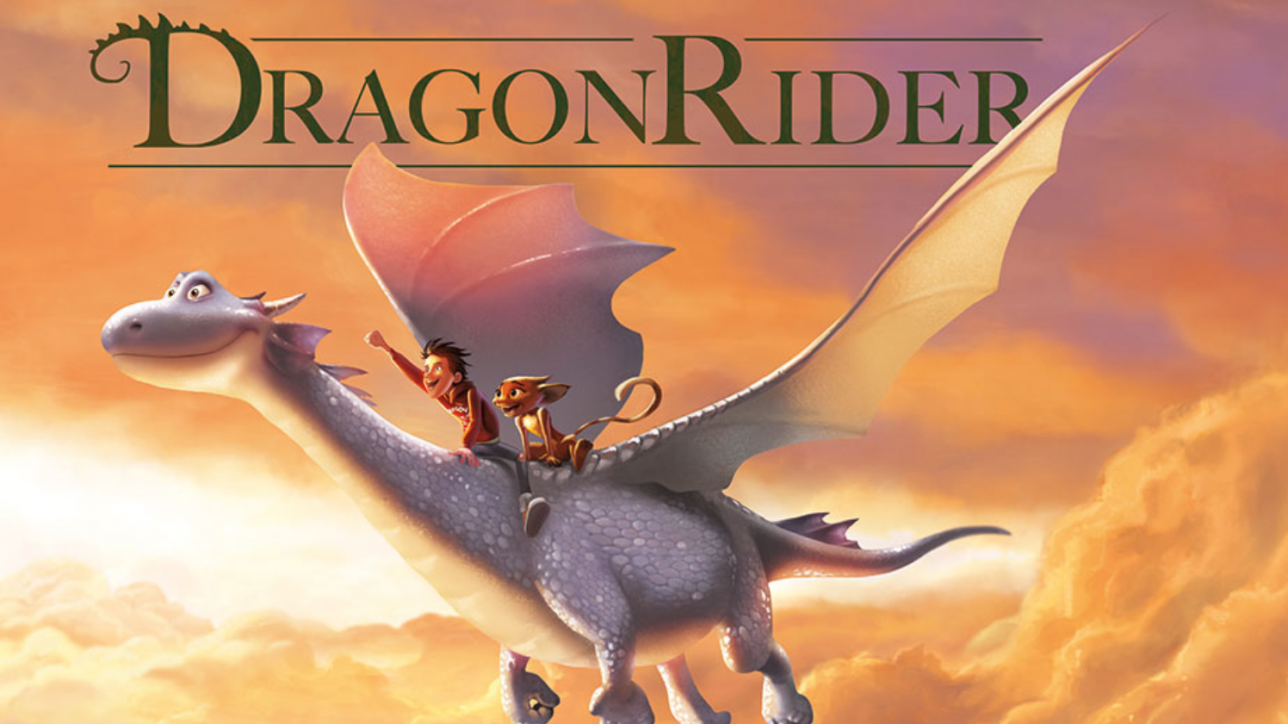 Written by Johnny Smith (Gnomeo & Juliet), Dragon Rider trails an unlikely trio of heroes – young silver dragon Firedrake (Brodie-Sangster), Sorrel (Jones) the mountain brownie and a boy called Ben (Highmore) – as they embark on an epic adventure and battle against a vicious, dragon-killing machine called Nettlebrand (Stewart) to ﬁnd the ‚Rim of Heaven‘.

Constantin Film CEO Martin Moszkowicz commented: „I am thrilled to see so many great artists joining Tomer Eshed and his creative team for the next outstanding animated family film event from Constantin Film.“

Timeless Films has already sealed a raft of deals worldwide on Dragon Rider and is continuing sales heading into Cannes. The film is due to be delivered Fall 2019.

Jones received a best actress Oscar® nomination for her work in The Theory of Everything and starred as Jyn Erso in Rogue One: A Star Wars Story and in Inferno opposite Tom Hanks.  She most recently wrapped production on Mimi Leder’s On The Basis of Sex.  She stars next in The Aeronauts for Amazon Studios and is attached to Universal’s upcoming Swan Lake adaptation.

Brodie-Sangster is best known for his role as Sam in Love Actually and his lead roles in hit films Nanny McPhee, The Maze Runner series, “Godless” US TV Series (Netflix) and “Game of Thrones” US Drama Series (HBO). He has previously leant his voice to “Thunderbirds Are Go” alongside Rosamund Pike and as Ferb Fletcher in Disney’s “Phineas and Ferb”.

Stewart is best known for his roles as Professor Xavier in the X-Men films and Captain Picard in seven seasons of “Star Trek: The Next Generation”. He has previously leant his voice in TBS’ “American Dad!”.

Highmore received a best actor Golden Globe nomination for his work in ABC’s “The Good Doctor” and has starred in Finding Neverland, Charlie and the Chocolate Factory and “Bates Motel”.

Syal received a BAFTA® nomination for her work in “The Kumars at No. 42” and has appeared in countless film and television projects including Paddington 2, “Riviera”, “Doctor Strange” and “Doctor Who”. She most recently wrapped production on Disney’s Patrick.

Bhaskar received a BAFTA® nomination, A Peabody and Two International EMMYs for “The Kumars At No 42”, a series he created, wrote and starred in and has appeared in Paddington 2, Arthur Christmas and Absolutely Anything opposite Simon Pegg and Kate Beckinsale.

Established in 2009, Timeless Films is the only independent sales and production company specialising in the development, production, financing and distribution of animated and family films worldwide.

Founded by industry veteran Ralph Kamp, Timeless Films benefits from strong alliances with collaborators which have enabled them to assemble a slate of high-quality animated and family films including Postman Pat: The Movie, Rock Dog, Animals United and Monster Family.

Constantin Film has been synonymous with quality and success for over 40 years. It has played a crucial role in establishing German cinema both nationally and internationally. Between 1977, when Bernd Eichinger established the company, and today, Constantin Film has emerged as the most successful independent production and distribution company in the German media industry. Constantin Film’s operations include German and English language motion picture theatrical production, theatrical distribution, home entertainment distribution, licensing and television production. Constantin Film’s diverse slate includes box office hits and award-winning films alike, ranging from comic book to literary adaptations, historical dramas, action and genre, among them THE NEVERENDING STORY, THE FANTASTIC FOUR film franchise, THE NAME OF THE ROSE, NOWHERE IN AFRICA, DOWNFALL, PERFUME: THE STORY OF A MURDERER, THE BAADER MEINHOF COMPLEX, POPE JOAN, THE HOUSE OF SPIRITS, FACK JU GÖHTE 1-3, three of the biggest ever German box office hits, the RESIDENT EVIL film franchise and TV series SHADOWHUNTERS – THE MORTAL INSTRUMENTS.

is an animated feature film based on the successful bestseller by Cornelia Funke, which has sold more than three million copies worldwide. A family film about an unlikely trio of heroes – a dragon, a boy and a forest brownie, and their epic adventure to find the ‚Rim of Heaven‘ – the mythological safe haven for all dragons. Their quest leads them from the wilds of Northern Europe, halfway around the world, to the snowcapped Himalayas.

When humans threaten to invade the valley the dragons live in, Firedrake, a young silver dragon, and his best friend Sorrel, a forest brownie, sneak away in the middle of the night and secretly embark on a great quest to find the ‘Rim of Heaven’, a mystical place the other dragons consider to be a myth. On the way they meet Ben, a 14-year-old boy, who joins them on their journey under the pretense of being an alleged ‘Dragon Rider’. Firedrake puts his faith in the boy, despite Sorrel’s protests that humans should not be trusted. Unbeknownst to the trio they are being stalked by a vicious, man-made, dragon-killing machine called Nettlebrand, who is intent on following them to the Rim of Heaven and hunting down Firedrake and all the other dragons there. Once Firedrake, Ben and Sorrel realise that Nettlebrand is following their tracks, a race against time begins. Their journey ends in the discovery of the Rim of Heaven, the defeat of Nettlebrand and avoiding the reignition of war between dragons and humans.

FIREDRAKE is a young and enthusiastic dragon, and the only silver dragon in the pack. When the humans threaten to invade the valley, feelings of responsibility drive him to take things in his own hands and secretly fly halfway around the world in search of the Rim of Heaven, with the sole intention of finding a safe place for the dragons to live. His self-belief is shattered when he realises he is ill-equipped to meet the challenges of a world filled with threat and menace. Firedrake seeks guidance from Ben, a self-proclaimed ‘Dragon Rider’, who he believes will help him to fulfill his task. Through his belief in Ben, Firedrake discovers his full dragon potential, which later turns out to be the key to fulfilling his destiny as the unlikely savior of all dragons and the only one who can overpower Nettlebrand. At the end of his quest Firedrake overcomes both mental and physical barriers and transforms from being naive and inexperienced, into a true, future leader.

BEN lives alone in a deserted warehouse in a big city. He’s street smart, clever, cunning and uses any opportunity to his advantage. But underneath his confident exterior Ben is a hurt and lonely little boy, orphaned at an early age and forced to live a premature adult life. Ben plays along with Firedrake’s false assumption that he is ‘Dragon Rider’ in the hope that he and Sorrel will lead him to the treasure hidden in the Himalayas. When he eventually discovers there is no treasure in the mountains, he is torn between fleeing or standing with his new friends to face Nettlebrand. Against his better judgment he chooses the latter. Throughout the quest Ben’s perspective of the world and of himself gradually changes from being self-centered, to caring and compassionate. He realises that he is destined to a purpose much greater than he could have ever imagined and learns the true value of friendship. During this transformation he becomes living proof to Firedrake and Sorrel that not all humans are inherently bad. For choosing the right path, Ben is rewarded with a wonderful new warm home and a loving foster family.

SORREL is a female brownie and Firedrake’s best friend. She is small, fast, agile and would do anything to protect Firedrake. Using her keen senses, she detects threats and keeps the group out of trouble. She dislikes humans due to her family’s profound prejudice against them and is very worried by Firedrake’s decision to allow Ben to join their quest. Firedrake’s newly found friendship with Ben tests Sorrel’s loyalty to the limit. She is confronted by her conflicting feelings and preconceptions about humans as well as being envious due to the threat of losing her place as Firedrake’s best friend. After going through the adventure as a team, meeting new friends and overcoming dangerous challenges together, Sorrel finally understands that humans can choose to change their ways from bad to good and drops her prejudiced opinions.