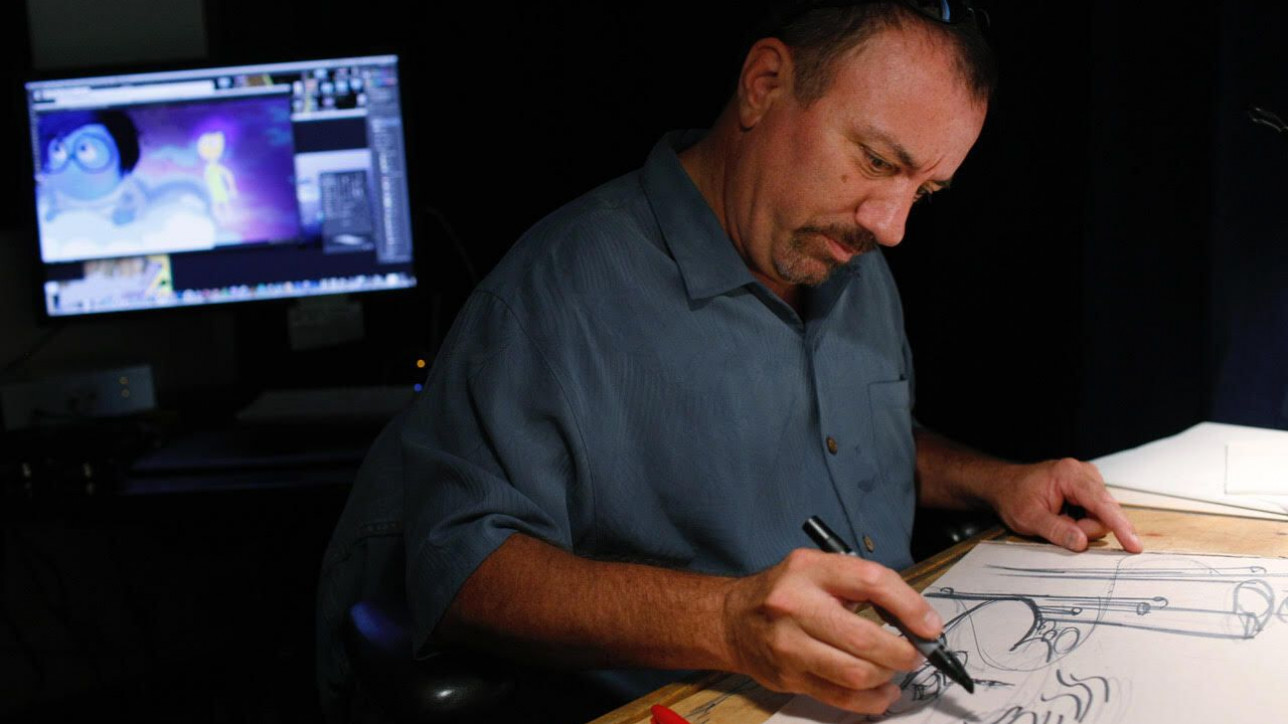 [with kind permission by the author]
.
RIP Ralph Eggleston
.
When I first moved to Southern California I was blessed to meet Bill and Sue Kroyer who graciously invited me to their home for their annual Xmas party. I was so eager to attend that I arrived a little early and was greeted by Ralph Eggleston. He was dressed appropriately in his glorious holiday sweater and was incredibly kind – he toured me around and began talking with me about animation and literature. I soon learned that Ralph was a titan in our industry and an art director/production designer at the coveted Pixar Animation studios. I returned every year and like a strong pillar Ralph was there greeting me (and other guests) each time. I so looked forward to these yearly chances to meet Ralph again and await his engaging convo and recommendations for a new book – which I would quickly add to my notes and order the next day. He always recommended text that was relevant to my research or interest- he was incredibly well read and versed in so much art and Hollywood history.
I was lucky enough to interview Ralph at Pixar when I was writing a book and he gave me two hours worth of pure gold. Ralph essentially invented the color script which is used widely today in the industry. Many artist will paint individual frames making color palette choices to the story board. However, Ralph had more of a holistic approach creating these long panels suggesting color changes throughout sequences.
Here is one story he told me that I use when I teach every year:
Ralph was production designer on Finding Nemo and had this great idea to make the tone and color darker as a visual analogy throughout the film. As Marlin searched for Nemo- while he was physically getting closer- it became more difficult to see due to the murky waters. This was a great way to have the audience feel Marlin’s emotion as the climax built showing the obstacle becoming greater. This heightened the intensity and the motivation for this father to find his son before he was completely lost.
Ralph told me that he would get feedback from some of the executives telling him it was getting visually too dark on the screen and that they felt the audiences would get tired. However he stuck to his guns and we can see the power of his artistic choices in the film today.
This was only one great example of Ralph’s brilliance. Lucky for all of us you can see more of Ralph’s genius in so many great films over the last 30 years.
Ralph was one of the best artists out there and was passionate about reminding people that Animation is an art form for all ages and is just not just a genre.
Ralph Eggleston is one of my hero’s and he will be greatly missed by so so many.
Rest In Peace Ralph!
.
by
Aubry Mintz
.
.
aubry mintz, in memoriam, Ralph Eggleston