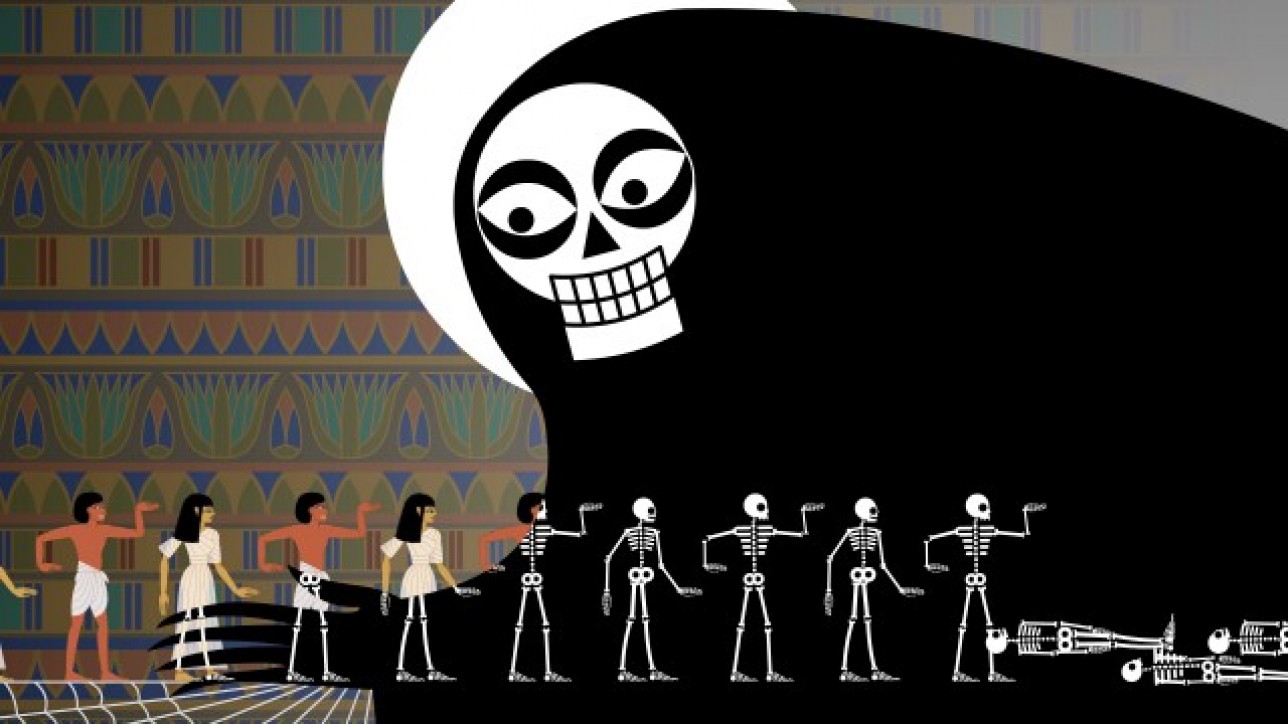 Seder-Masochism, an animated musical, loosely follows the Passover Seder story, with events from the Book of Exodus retold by Moses, Aharon, the Angel of Death, Jesus and the director’s father. The film puts a twist on the traditional Biblical story by including a female deity perspective – the Goddess in a tragic struggle against the forces of patriarchy.

Seder-Masochism has been in the works since 2012 when Paley first animated a scene called This Land Is Mine, a parody about never-ending conflict in the Levant which has been viewed over 10 million times on various online channels.

In addition, Paley has written and designed a companion book, The Seder-Masochism: A Haggadah and Anti-Haggadah, currently available through Amazon.

Paley released her first feature, Sita Sings the Blues, for free to the public in March 2009 under a Creative Commons Share-Alike license, dedicating it to the public domain 5 years later. Contradicting movie industry expectations, the more people saw Sita online, the more they sought it out in theaters and film festivals. In December 2009, Sita enjoyed a 5-week run at the IFC Film Center in New York (extended by popular demand beyond its planned 1-week run), and it continues screening in theaters, festivals, and special events to this day.

Accustomed to working outside the mainstream movie industry, Paley has made Seder-Masochism a one-woman project: she wrote, directed, and animated it herself on a total budget of $20,000. Being independent allows her to release and distribute her films in unorthodox ways – such as into the public domain.

A Public Domain dedication (using a Creative Commons license called CC-0) means anyone can re-use, remix, and redistribute the work, with no restrictions. All of Paley’s animation and images will be free for anyone to use however they wish; however the music will continue to be controlled by its copyright holders.

Paley has no plans to pursue commercial distribution for Seder-Masochism. “I claim Fair Use for the music, but distributors are loath to do that. Instead they’d want to obtain music licenses, which would be daunting,” she says.

The Digital Cinema Package (DCP) release will be issued later in 2019, so that upcoming film festivals can be assured of regional theatrical premieres.

The release of her films into the public domain is just the latest effort Paley has undertaken to advocate for Free Culture. In 2008, while navigating copyright for Sita Sings the Blues, she joined the nonprofit QuestionCopyright.org as artist-in-residence, where she later created a series of shorts about Free Culture called Minute Memes. She has spoken extensively about copy restrictions and art, including her 2015 TEDx talk “Copyright is Brain Damage”.