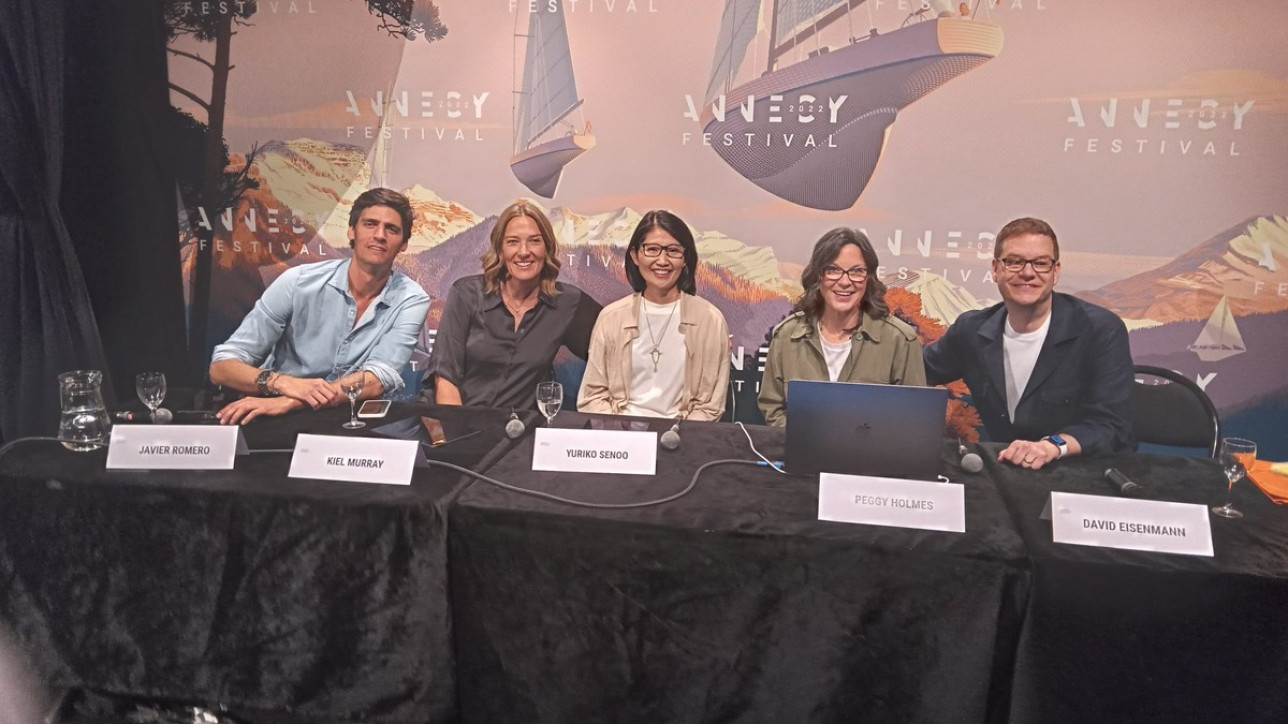 At Annecy 2022, director Peggy Holmes and her team presented a amazing first look into the very first upcoming feature film production „LUCK“ by Skydance Animation. We had the great luck to talk to Peggy Holmes after having seen around 20 minutes from the movie!

Question: Being from Germany I was amazed to meet a german Unicorn in your film!

Question: Well, I just hope, its connected to the land of good Luck! Even if the Germans are stereotypically & historically not very much connected to good luck.

Peggy Holmes: Let me just tell you about that character! So at Skydance Animation we are big on research, super, super, super big on research, right? So we are researching all kind of good luck characters, bad luck characters, international good luck and bad luck symbols, icons, things like that! Unicorn comes up! Here is the thing about unicorns! Unicorn are sort of lone creatures that take care of those around them . That´s actually what a unicorn is all about. So in just case our unicorn – he actually lives in the Inbetween. He actually lives between good and bad luck. There you have it! He lives inbetween good and bad luck. And he takes care of, he is sort of an engineer, he takes care of the thing we call the Randomizer, that is sort of the heartbeat of our world. He takes care of that Randomizer, you know, and Unicorns have taken care of it for centuries after centuries so that the world will function.

Question: So this Randomizer sounds very technical and a german engineer would be at the right place? 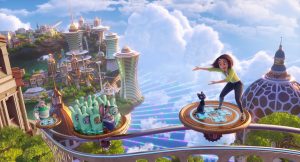 Question: Could you tell me a little bit more about your research? You had to build all those worlds, „good luck“, „bad luck“ „inbetween“ and our world – that raises so many questions? How did you do that? 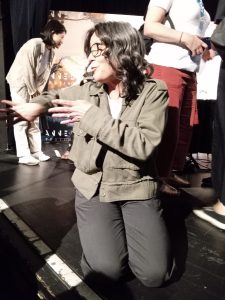 Peggy Holmes: Oh, we have a great development team at Skydance, right? We use this development team to do the research. And then we all, myself, Marie, the head of our story, all the others, we all just dug in. Right? We wanted to understand what is this idea of luck! We had this concept of good luck and bad luck for the movie and we really wanted to understand what is it! So in all the papers, the first couples of weeks on the movie I read and watched videos. Humans are obsessed with the idea of luck. I did not really know that. Humans are really obsessed with that. I did not know how many Phd level papers have been written on that subject. So when I started reading everything something became very, very clear to me. Luck is random! So that became one of our stakes in the ground like: okay, this is what we know! Luck is random!! So we put that on a card up in the storyroom. That is something that we can´t stray from! Those are the rules of the world. It has to be real. We can´t create luck! It´s not skilled. You can´t make it happen. You do not literally have any control about luck. So if you start to put those rules down, it starts to weed out other things. When we look at the lucky icons from around the world, there are some that are superstition and there are some that are luck. So now, you start to weed out things that are really about superstition. They are not about luck at all. So you just keep going until you get the world in a managable place. And then the other thing that is super- super important to us is – you know the movie is called „Luck“ but it is really about love. Eight? And so, Sam has some real life bad luck. She has been grown up in the foster care system, she is eighteen, she is aging out of that system and litterally on her own in the world. And that is the real bad luck that is at the heart of the story. It is the idea that Sam thinks that she will never ever find a family. And ultimately she does. And I come from a really big family, its the thing I cherish most in life and I just love this idea…. Oh you do too, you do too … [laughs]

Question: Seven! We were seven and I was the youngest one! 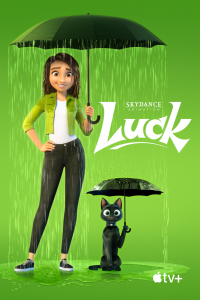 Peggy Holmes: Oh my gosh. We were seven, I was number four!!!! [great smile]So you know what it feels like to belong to something like that. And I wanted to give that to Sam. I wanted her journey to be all about getting that feeling – what it feels like to find her „forever family“. So in thinking about that we of course also did research in that direction. And we met with that amazing youthts, that had lived the same life that Sam has lived. And we were so drawn to how generous of heart they are. They would give you the shirt of their back. They valued love because they know what it is like not to have it. They were just so positive. And they just keep going. Despite the bad luck they have, they keep going. And we were realy, really, really drawn to them and impressed with them and touched by their stories. They don´t minimize their bad luck. Its real. They say: Look, I would not want to live that again but I would not change it – it made me what I am today. It made me who I am!

Question: Wonderful! I have just seen only 20 minutes from the film, the moment that I really loved most, is when the cat is walking over the umbrellas. That was wonderful! I….

Peggy Holmes: Wait!!! I just want to give credit!!! So, our storyartists Louie del Carmen thought of that! It was Louie´s moment. We are sitting in a storymeeting, Louie pitching his version of the chase. He is the one, who did the first drawings of Bob – Louie pitching his version and all of a sudden – Booom – we see this umbrella moment – we all „Thaaaats ittt! That is the moment! 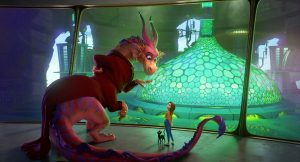 Question: I am always amazed, when I see something elegant, like it is just happening and it looks so unbelievable easy. And when you know how hard it is to come up with something like that and you make it look so easy – I am admiring that enormously!

Question: Its somehow unfair that we do not see all this work, isn´t it?

Peggy Holmes: Well! [big laugh!] I wouldn´t say unfair. I mean, we are sharing some of that work at Annecy, right? You saw the side by side clip, which is amazing. You saw the progression reel of that moment, where we are sharing every way, every moment. And for me every stage it goes into is just as exciting as the stage before. That is what is so cool about animation. Each artists takes the next step. Each artists takes ones artists work and builds on top of it. Every time, every single time. Until the very end, which – you know, our sound effects designer Pete Horner up at Skywalker and then John Debney´s score. That is booom – at the very end. They boost it even more! That is, what I love about animation. That is what I love doing animation.

Question: If you come up with a feature film, that is one thing but there is also a studio that has never done a feature film before, so you have to come up with a pipeline. And certainly there have been throwbacks, that wold drive me crazy. And then there is suddenly a pandemic going on.And on top of it, you work in Los Angeles and in Spain, two continents, different timezones and I could imagine different cultural environments – you do not have a single grey hair – how come???

Peggy Holmes: [Big Laugh] Oh I have that filter here in zoom. I have dialed it up all the way up…. Here is the thing: I really appreciate you recognizing what this is. You know what I mean. I actually really, really do appreciate you recognizing that. This is a big deal for Skydance. It is a unique opportunity, it is why I am superhappy over there! We are starting a studio from the ground up. Right? There are so many things that are going into that. So many things. We are the first ones. It is an invigorating challenge, of course it is frustrating sometimes. But there are moments that are so magical, that you are like „This is worth it! This is worth it! This is worth it!“ We are getting the opportunity to tell a deeply emotional story in an entertaining way. It is really, really worth it! And we worked really hard. I am so proud of the whole team. It was very challenging. We made this movie over Covid. I never met the actors in person. Never met them in person. Directing over Zoom the whole time. There are crewmembers that I litterally haven´t met in person. And then its the timezones, like you are saying. We have a team in Connecticut. We have about fifty artists in Connecticut in addition to Madrid. So its finding -its everyone being open to finding the time to have enough hours in the day that overlap. And then you know, really honing our communication skills. Honing our communication skils was really, really challenging and we all worked hard to do it. Everybody wanted to do it. So we made it happen. But you are definetely in for the long game. You know, you needed a lot of patience. And you needed to learn how to make written notes very clear. You know it is challenging, Sometimes you are talking to artists and you are giving them a written note. Because you need them to wake up in the morning and start work. You do not want them to have to wait. You want them to get up in the morning and have what they need, like make this scene better. So that is how we did it. We did a lot of zoom recordings like this one here right now, where we would talk. Here is what I am thinking, they can see the scene – so we did a lot of those zoom recordings. That was really helpful. And then I went over there. Teammembers went over there. I was probably in Spain for about twelve weeks, something like that. Other teammembers as well. That was super helpful to be in the same room!