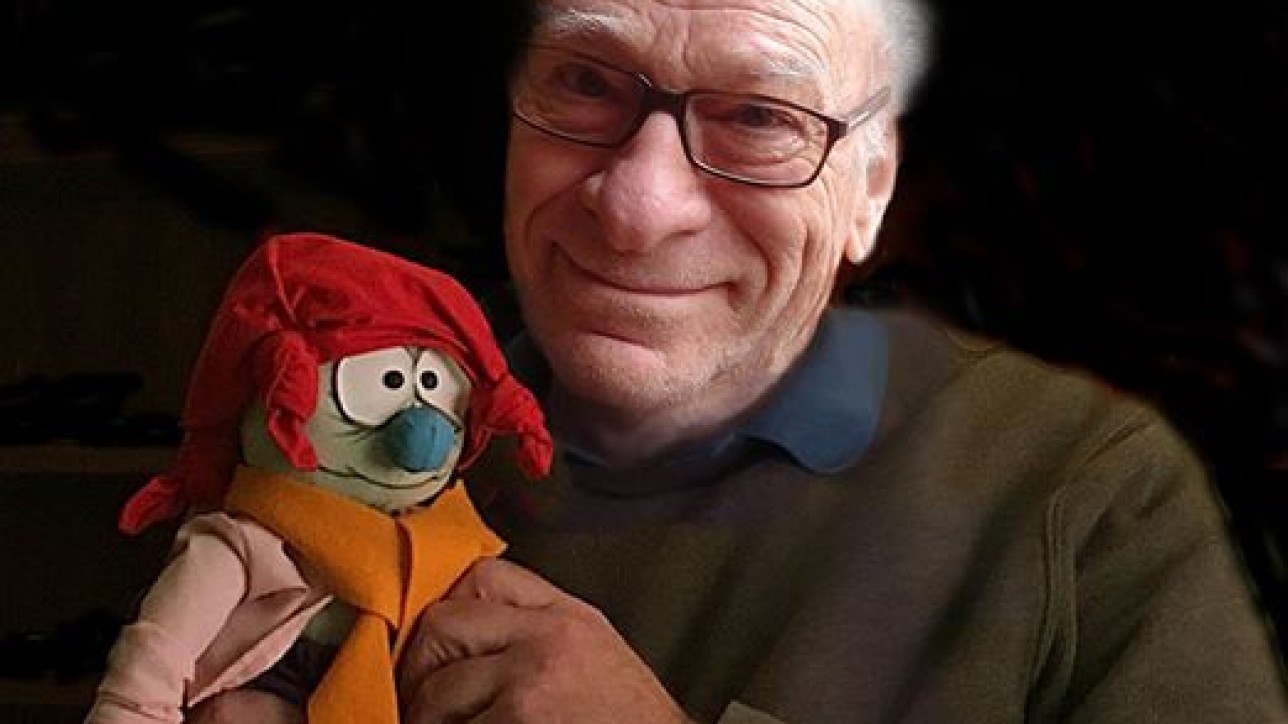 Info: „Eugene Merril „Gene“ Deitch (born August 8, 1924)[1] is an American illustrator, animator and film director. Based in Prague since 1959, Deitch is known for creating animated cartoons such as Munro, Tom Terrific, and Nudnik, as well as his work on the Popeye and Tom and Jerry series. “ (Wikipedia)

TRY THIS: FIGURE OUT HOW TO CHOOSE ANYTHING YOU WANT TO SEE, AND CLICK-CLICK-C LICK THROUGH MY ENTIRE CREATIVE LIFE.
A GENE DEITCH HUMONGOUS TELL-ALL DATABASE

READ THIS FIRST!
“For The Love of Cartoon Animation”
A GENE DEITCH AUTOBIOGRAPHICAL DATA BASE

The main list are the general topics, which you can read in any order you choose! Within each folder there may be a large number of graphics, photos or texts. They are arranged by year of origin, dated as closely as memory allows.. Example: “1979 : Mixing Soundtracks At Home,”

I was born dazzled, on 8.8.1924. 32 years later I got kicked out of the best job I ever had, being judged as over-dazzled. I dangerously had it in me to be constantly pushing my limits, just as any dazzled lover does, and I often paid the price for that. But actually, I’d been an extremely lucky animation lover, chancing in 1946, into the very lair of other dazzled animation lovers: The newly hatched UPA Hollywood studio. These top dogs of animation impressed me as barking up the right tree. I was taken in by the leaders of the pack, who were nipping at the heels of the Disney norms. I was trying new things that film animation barely allowed, leading up to the time when that it now seemingly allows everything! A time of explosive change, as the technology bar is raised ever higher, to the point of confusion between animation and live action. The Twain Meet, but should do so in mutual respect!

In spite of my realization that I could never match those original alpha pointers,
doing it my way got me a modicum of attention. I was constantly given work. I was often written up in the press and listened to when I spoke. I’ve never been unreasonably modest, so I squirreled away many articles about me or by me. I brought a lot of scrap book stuff with me when I moved to Prague in 1960, over a half century ago, and it’s mega-multiplied during that time, covering 65-years of work in many forms and fashions of animation and experimental, sometimes goofy technologies.

In 2014, my 90th year, when producers finally gave up the idea of hiring me anymore, I had time to sweep up my little personal studio. I’ve gathered tons of long hidden stuff, representing what I was doing or trying to do during that revolutionary period in animation history, when the upward spiral of animation experiments meshed with the rocket powered lift-off of digital technology.

By the time of my personal space/time/shift/ in 1946, landing a job at the nascent UPA studio in Hollywood, it dawned on me that animation was the greatest art/entertainment/information format ever devised, combining all existing art forms into one: drawing, painting, graphic design, writing, prose & poetry, theater, acting, comedy, drama, mime, music, song, dance, even sculpture and architecture… all rolled up into what was then just thought of as just silly movie cartoons, a tiny side car of the mighty movie machine, but now it’s the sparkplug of the engine!

That animation potential underpinned everything I did. Even though I rarely achieved the art I believed was inherent in animation, the goal was always before me.

So after 65 years of trying every which-way to achieve it, I am now in the stage trying to sum up; to see if anything I’ve done, tried, or thought about can possibly be useful for you to know about. This is a personally constructed database made up of photos, drawings, videos, career documents, publicity, film reviews, correspondence, articles written by others and by me, my opinions, obsessions, histories, and creative adventures, covering the first 90 years of my life, primarily related to my career in animation.

As many of the documents, especially newspaper articles, date from my early age, and are up to 80 years old, I’ve had to use my computer to make them readable. However, there has been absolutely no altering of content. Everything in this stuffed data-base is 100% authentic.

It has all been assembled by me, from my personal collection of private mementos.
It may be fairly claimed that this collection of writings, drawings, and photos is nothing else than my obsessive-compulsive-self-aggrandizement. But I have not omitted negative comments. There were a few. The nature of film criticism is that if someone is doing substandard work, he or she is simply ignored. So for whatever reason, media revues of my work have been positive. I’ve been amply honored and rewarded. I’m no longer poor, but I’m also not rich by today’s standard of richery.

If I have any importance at all in the history of film animation, it may simply be that my 65-year professional career spanned a period of cosmic change in the artistic status, technical development, and mass public acceptance of animation. My main claim to fame is that I strived, in each project that came my way, to take maximum advantage of what was technically available to me at the time. I was hired to tell stories. If I haven’t actually done big, I’ve tried to think big, and to write big.

I must make one major admission, to put my work in perspective: I have never personally financed a single one of my hundreds of film projects; never bet my own money on anything so risky as movie-making! Others have always optimistically risked their money on me. That of course meant that they owned my films, and would get all of the profits. I was paid my fees. Period. With the single exception of my Weston Woods films, profits usually shivered below zero.

For 65 years I worked strictly as a hired-hand. My backers took the financial risks. Oddly, they eagerly went for that. They rarely profited, but I was paid my up-front US dollar fees. Yeah, I also took home a hundred or so gold plated statuettes, but mainly, as an American citizen, and a bona fide foreign resident

I qualified for a signifiant IRS tax deduction. That, and the fact that this was an incredibly cheap place to live, and Zdenka was among best paid here, it all added up to mean I that I had landed an amazing chance to bank most of my dollar earnings! So there, folks, is the answer to those who thought I had become a communist!

I grew up in a way of life nearly beyond imagining by the youth of today. I can clearly remember when my mother bought fruit and vegetables from a horse-drawn wagon, clopping through our Chicago back alley. An organ grinder’s monkey tipped its hat, begging for her coins, and an iceman climbed our back stairs, his iron tongs holding a massive chunk of frozen water on his back, and dropping it into our “icebox.”

Not even the pulp fantasy magazines of the time predicted that everyone above the age of 8 would one day carry a tiny slab of plastic, glass, and electronic ganglia, combining a telephone, information center, camera, calendar, notebook, timepiece, map, encyclopedia, library, shopping center, book shop, newspaper & magazine stand, movie show, and animated games…all in a device the size of a graham cracker! There’s no point in my listing the things we have and depend on that didn’t exist when I was a kid, but it was pretty much everything we own.!

Our work in cinema animation has been vastly transformed even in the past decade. Its methodology bears little resemblance to its previous century of development, yet its goals are exactly the same; to inform, entertain, and advertise. So I’m comforted that what I’ve managed to do in the 65 years of my career still has some validity, and has contributed in at least small ways to the new horizons now coming into view.

In this life-size personal data-base I’m presenting to you, I hope you’ll find many things interesting and useful. I’ve organized it all into bite-sized hunks, to make it easy for you to get at, and to guide you to discover some surprising stuff. Scroll through the set of labeled blue folders. Click on any that look interesting, and you’re into the nitty-gritty. Wherever possible, all items are filed by year of origin.

As long as I’m able, I will be steadily adding, updating, and responding to your thoughts, questions, and requests. There are in fact many weird background stories that go with nearly every item! If boredom sets in, don’t hesitate to tell me about it!

You can use this entire data base as a library. You may not have the disc space to copy the entire database, so just scroll to an item that seems to be interesting, and copy it off, then delete your copy and try another. If you just go one blue folder at a time you will avoid giving your hard disc a hard time. IF YOU HAVE ANY COMMENTS, IDEAS, QUESTIONS OR SUGGESTIONS, BRING THEM ON! Gene 2017